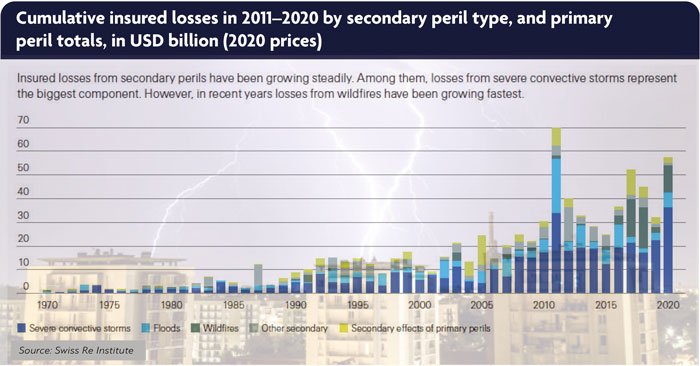 Insurers have been told they need to factor in forward looking risk trends into their natural catastrophe calculations rather than relying on historical event to estimate their exposures.

The warning came as the Swiss Re Institute published its sigma report on natural catastrophes in 2020.

While the headline figure found that global insured losses last year were $89 billion, making it the fifth-costliest year on sigma records since 1970, it was the rise in secondary perils which has set alarm bells ringing for underwriters. The study found that secondary peril events accounted for 71% of natural catastrophe insured losses, resulting mostly from severe convective storms and wildfires in the US and Australia.

The report warned recent years have seen a rise in losses from secondary perils.

“Primary perils are well-monitored by the insurance industry, but secondary-peril risks less so. Risk assessment efforts need to rebalance to make secondary perils a priority,” the report stated.

As the perils increase, the global insurance gap shows little sign of reducing according to the report. Natural catastrophes in 2020 caused global economic losses of $190 billion; of which the insurance industry covered $81 billion.

Examining the overall losses in GDP-normalised terms, the report said losses rose 1.6% between 1970-2020 on a 10-year moving average basis.

“This is indicative of the larger scale of losses that could result if an event of the past were to occur today, given the accumulation of socio-economic value and other dynamics such as changing weather conditions in the intervening years,” it added.

Last year’s North Atlantic hurricane season was deemed to be a lucky escape for the region, the economy and the industry. A record number of 30 named storms caused moderate insured losses of $21 billion; 12 US storms made landfall in areas of low population density and exposure – if storm occurrence patterns had been less favourable, insured losses would have been much higher.

However, the secondary perils are a major cause for concern according to Martin Bertogg, Swiss Re’s Head of Cat Perils.

“We have seen an increase in losses from secondary perils in recent years, such as severe convective storms, floods and wildfires. The same upward loss trend for primary perils and 2020 serves as another reminder of their peak loss potential,” he said. “The two peril types are affected by the same loss-driving risk trends, including population growth, increasing property values in exposed regions and the effects of climate change. This suggests that with climate change, future peak loss scenarios could also increase significantly.

“There were a record-breaking 30 named storms during hurricane season 2020 and a further record was set when 12 of those made landfall in the US. It cost the insurance industry $21 billion in claims. Yet, incredibly, we would regard that as somewhat of a lucky escape.”

He warned insurers face a need to change the way they calculate their exposure and accumulation risks.

“Given the dynamic nature of risks, re/insurers’ risk models need to increasingly consider forward-looking risk trends, such as climate change, urbanisation and socio-economic inflation – rather than relying on historical data observations – when assessing the potential magnitude of losses,” said Mr Bertogg.

Swiss Re Group Chief Economist, Jérôme Haegeli warned that the global fight against the COVID pandemic could not cloud the industry’s focus on the ongoing threat posed by climate change and ever more frequent natural catastrophe events.

“2020 will be remembered for the global health and economic crisis triggered by the COVID-19 pandemic,” He explained. “But while COVID-19 was a stress test for society and the economy, it has an expiry date – climate change does not. In fact, climate change is already becoming visible in more frequent occurrences of secondary perils, such as flash floods, droughts and forest fires.

“Natural disaster risks are increasing and climate change will significantly exacerbate them. This underlines the urgency to better protect our communities against catastrophic losses while dramatically reducing carbon emissions. Unless mitigating measures are taken, such as greening the global economic recovery, the cost to society will increase in the future.”

Mr Haegeli added: “In many regions of the world, the need to close protection gaps persists for both primary and secondary peril exposures. Re/insurers can do more to help people, businesses and societies become more resilient.”

While the headline figure found that global insured losses last year were $89 billion, making it the fifth-costliest year on sigma records since 1970, it was the rise in secondary perils which has set alarm bells ringing for underwriters. 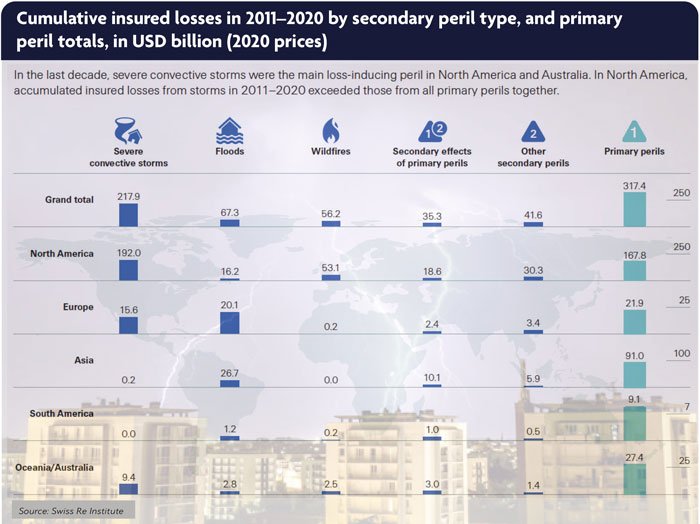