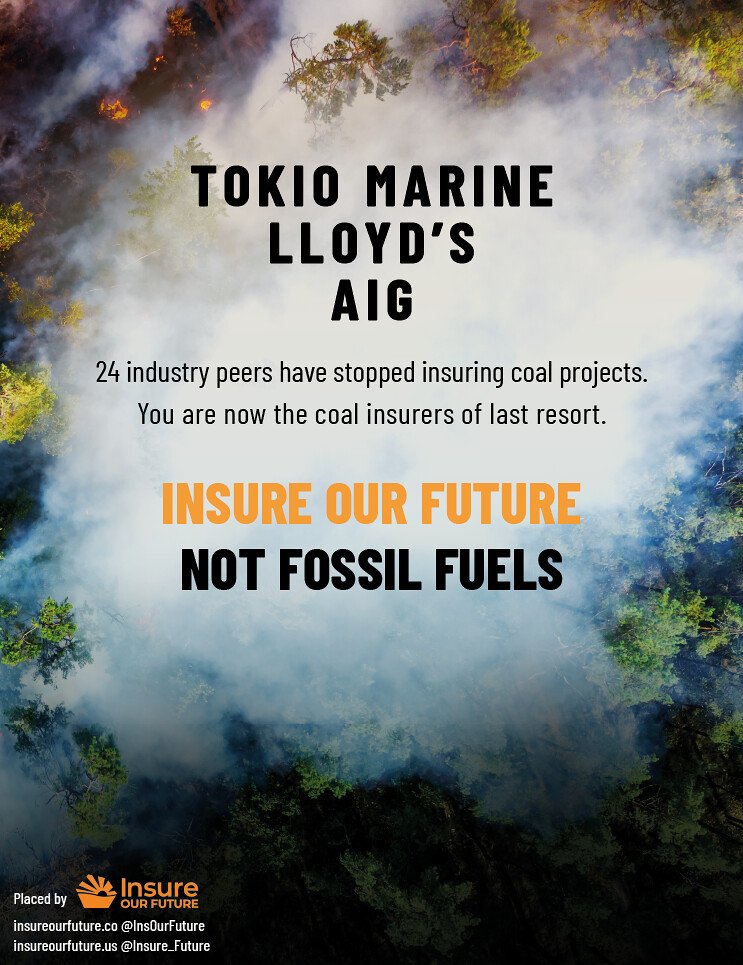 Climate campaigners from across the world have renewed their pressure on the global insurance industry with a string of actions today.

The groups have targeted AIG, Lloyd’s of London and Tokio Marine with a renewed call to immediately stop insuring and investing in coal.

The Insure Our Future network placed a full-page ad in the Financial Times calling out the “insurance laggards” as climate groups in Japan, South Korea, United States and the United Kingdom held both physical and digital actions demanding the three insurers “Insure Our Future, Not Fossil Fuels”.

Mobile billboard trucks circled the three insurer’s offices in New York City and London, while campaigners gathered outside of the Tokio Marine offices in Tokyo and Seoul. At the same time, activists from around the world emailed the CEOs and other senior level executives with demands that they drop coal.

“While 24 insurers have committed to stop insuring coal with immediate effect, AIG, Lloyd’s of London and Tokio Marine continue to provide insurance for this climate wrecking industry,” the groups said in a statement.

The protests came soon after the report released this month by the International Energy Agency which warned there is no room for any new coal, oil, or gas in a net-zero by 2050 pathway.

“Lloyd’s adopted a climate policy in December 2019, but it allows for continued insurance of existing coal, tar sands and Arctic energy projects until 2030, and has no plan to exit oil and gas,” added Insure Our Future. “The Lloyd’s market is insuring some of the world’s dirtiest projects, including the Trans Mountain tar sands pipeline in Canada, the Adani Carmichael coal mine in Australia, and oil drilling in The Bahamas. F

lora Rebello Arduini, SumOfUs Senior Campaigner added: “Lloyd’s of London are the new masters of greenwash — putting out climate policies while continuing to prop up the world’s worst fossil fuel projects. But they have the opportunity to prove us wrong.

“If they are at all serious about protecting the planet, Lloyd’s needs to do what so many other insurers are doing and quit coal now.”

The campaigners said AIG is the largest insurer outside of China that has zero restrictions on coal underwriting. It is also one of the few companies willing and capable of insuring multi-billion-dollar coal projects.

“AIG has refused to drop the Trans Mountain pipeline and has connections with the Adani Carmichael coal mine,” it added. “AIG is also among the world leaders in insuring oil and gas projects.”

Elise Peterson-Trujillo, Climate Campaign Coordinator at Public Citizen said: “AIG enables fossil fuel extraction that pollutes our planet and our communities. In 2019, less than 1% of AIG’s premiums were earned from coal, yet the corporation refuses to rule out underwriting coal projects.

“AIG has also invested at least $26 billion in fossil fuel companies, further compounding the company’s devastating environmental impacts. It’s beyond time for AIG to drop coal cover and phase out insurance for all fossil fuels.”

In September last year Tokio Marine published its coal policy which “in principle” rules out insuring new coal projects, but the campaigners said it contains so many loopholes that it enables any power project conceivable in the pipeline to receive insurance.

Yuki Tanabe, Program Director at the Japan Centre for a Sustainable Environment and Society (JACSES) explained: “Tokio Marine has so far refused to rule out insuring new coal projects like the ones at Matarbari in Bangladesh and at Indramayu in Indonesia. Continuing to underwrite these projects will lock us all into a future reliant on the dirtiest fuel on the planet. Tokio Marine’s Annual Investor Relations Conference is today – what better time than now to commit to stop enabling any expansion of the global coal sector – with absolutely no exceptions?”

The protests came soon after the report released this month by the International Energy Agency which warned there is no room for any new coal, oil, or gas in a net-zero by 2050 pathway.