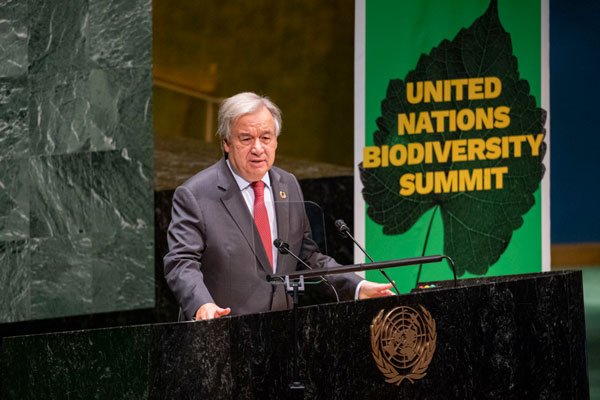 UN Secretary‑General António Guterres (pic) has said the world is “way off track” in its fight towards sustainability and has urged developing nations to put climate change at the top of their investment agenda.

Mr Guterres was speaking to an event organised by the Government of Guyana on its Chairmanship of the “Group of 77” developing countries and China.

“The Group of 77 members are among the countries at greatest risk from the impacts of climate disruption,” said Mr Guterres.  “Ambitious multilateral action and solidarity are needed to save lives and livelihoods from the pandemic and the climate crisis.  We need to use the recovery from COVID‑19 to put us back on track to achieve the Sustainable Development Goals and to win the battle against climate change.

“Climate action will be central to all our efforts.  We need to attain the goals of the Paris Agreement on Climate Change.  That means limiting global temperature rise to 1.5 degrees Celsius, supporting adaptation and climate resilience, and working towards net‑zero emissions before 2050.”

However, he said the world was failing in its efforts and there was urgent action needed.

“Currently, the world is way off track.  The last decade was the warmest on record.  We are witnessing more frequent and severe impacts from wildfires, floods, droughts and storms in every region.

“Climate action can help rebuild our economies, create millions of better jobs, and improve our health as we replace polluting industries with clean, efficient technologies.  It can provide the engine for growth in developing countries that will eradicate poverty and drive sustained improvements in human development.”

He called on members of the Group of 77 and China to serve as the “global role models” for a green, inclusive and sustainable recovery.

“The countries you represent have historically been among the strongest advocates for the Sustainable Development Goals and ambitious climate action,” continued Mr Guterres. “The world needs your leadership now more than ever.”

But adaptation and resilience are currently vastly under‑resourced, he added.

“To that end, I am urging donors to fully capitalize the adaptation and resilience initiatives launched at the Climate Action Summit.  They need to be fully operational and scaled up.”

“The Paris Agreement emphasises the importance of common but differentiated responsibilities in light of national circumstances.  Most of you will need financial and technical support to recover from COVID‑19 and to scale up your climate ambition.  A critical part of this will be enhanced financial assistance.

“That includes the decade‑long goal of mobilizing $100 billion dollars a year for mitigation and adaptation.”