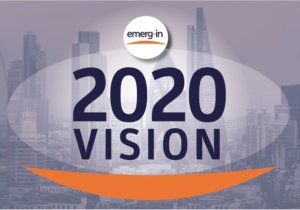 Is It Cheer Or Fear In The New Year?

Emerg-in Managing Director – Content Jon Guy looks at the year ahead and like many he believes that there is much to be done and hurdles to surmount for the industry in the months to come.

January is named after the Roman god Janus and for good reason.

He is the god of beginnings, gates, transitions, time, duality, doorways, passages, and endings. He is usually depicted as having two faces, since he looks to the future and to the past.

If there were to be a god of insurance then Janus would be it. Not because the industry is two faced (although some may say there are those to which such a charge could be levelled). Rather that it has been poor when it comes to learning the lessons of the past and hence a constant eye on what has been might be an idea.

However, there will be many that will look back on 2019 and seek to erase it from their minds. Rates have been talked up, the talk is they are on the rise, the reality for many is that they have hit rock bottom.

Sadly it is no longer a case of the insurers being able to ride out the storm unchecked. UK regulator, the PRA, has said it will use the coming months to ensure the industry addresses what it believes is a pattern of poor reserving.

It believes that the risk landscape has changed dramatically and that the market needs to look to new models in order the adequately reserve for its exposures.

A crushing Conservative election victory will have soothed big business but comes with the UK’s departure from the European Union by the end of January. It will then fire the starting gun for 12 months of intense negotiation over the future trading arrangements and the hope that passporting of financial services will be retained.

But it is not all bad news. The market is set to make itself more attractive to the wider population. Work on the culture in the market has started to bear fruit and it is finally clawing its way up the respectability table.

It seems young people are starting to understand the role that the industry plays in society and with it the tide is turning in the fight for talent.

Whatever happens the industry will not start the year with a headache. The clampdown on misbehaviour including the letter sent to 45,000 workers by Lloyd’s CEO John Neal saw the Christmas party season turn into an episode of the 2016 ITV series Paranoid. Gone were the cocktails in were the mocktails and clubs in the Square Mile were more line dance than lambada.

The Christmas period has seen the usual fun stories around risk but the silly season is now over and the first test will be just how successful the reinsurance sector has been to drive rate increases at the 1 January renewals.

The view is that rates across the board will increase but other than the car crash that is the corporate liability sector, rates will still be a significant way from coming close to a level which could be deemed to be technical.

It’s an Olympic year but for insurers and brokers it will be interesting to see which firms start the year with a sprint and those who prove they can last the distance.

It is after all and always will be a marathon. Can the industry go the extra mile in 2020?

Happy Christmas And Thank You
Scroll to top