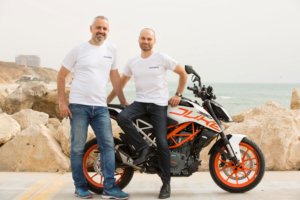 Italian insurer, Sara Assicurazioni, is to use a state of the art anti-collision system to improve motorbike safety.

The underwriter is to offer motorcycle policyholders discounts should they agree to implement the new system by Israeli tech firm Ride Vision.

In Italy those on two wheels are 28 times more likely to die in an accident than a car occupant. And the two firms believe that such an incentive will go some way to helping road safety.

Ride Vision will be launched in Italy early next year and is what is described as an Advanced Rider Assistance System with CAT™ – Collision Aversion Technology. CAT™ is a fusion of Artificial Intelligence (Neural Networks) and Computer Vision designed to seamlessly integrate with the motorbike, utilising standard cameras as visual sensors.

“Road safety has always been our main focus, and we’re now glad to start addressing the area of motorbikes where chances for an accident are higher,” says Alberto Tosti, General Manager of Sara Assicurazioni. “This is why we’re developing a promotional offer for Ride Vision retrofitted bikes.”

The two companies said while insurer incentives do already exist in the automotive market, they have mostly focused on providing solutions for cars. The high occurrence of motorbike accidents has left this segment of the vehicular insurance industry markedly ripe for similar collaboration. A survey by ACI-Istat revealed that 41,414 motorcycle accidents in Italy resulted in 755 fatalities and 49,447 injuries in 2018 alone.

“Our collaboration addresses an untreated segment of two-wheeler commuters and fleet operators to promote road safety. We’re confident that Ride Vision and Sara’s agreement will bring innovation to an often-overlooked community and is a crucial step forward to reduce accidents,” says Uri Lavi, CEO & Co-founder at Ride Vision. “The Ride Vision-Sara collaboration is unique precisely because it is the first of its kind to exclusively target this critical segment.

“In fact, Ride Vision is the first vehicular predictive system singularly tailored to motorcycles to enter the market. Filling this prime space for safety improvement is paramount as increasing congestion in cities drives up motorcycle purchases. This trend has most notably taken hold in Italy, which, according to FEMA’s most recently available Motorcycle Safety and Accident report, contains over 6,500,000 motorcycles, the largest amount of any EU country.”