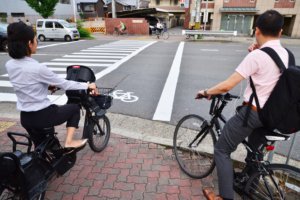 Japanese cyclists are increasingly being mandated to take out liability cover after a string of high profile incidents.

There are now several of the country’s local governments that have or are drawing up new legislations that will obligate bicycle riders and rental companies to use liability insurance.

They are being urged to take out cover due to the rising number of cyclists and with it a leap in incidents and accidents.

In 2017 there were 2,550 accidents involving cyclists and pedestrians, with 2,749 incidents between cyclists.

In 2013, the Kobe District Court ordered the mother of an elementary school student who had collided with an elderly woman, leaving her in a vegetative state, to pay ¥95 million (£67,200). The Tokyo District Court in 2014 ordered a man to pay ¥47 million after he hit a woman with his bicycle and killed her.

As of the end of last week, Hyogo and 10 other prefectures, as well as seven designated major cities, required bicycle users to get insurance, while 13 prefectures and three major cities had ordinances strongly recommending insurance coverage, without making it mandatory.

The Fukuoka Prefectural Government is considering making the use of insurance compulsory while prompting residents, including foreign students, to recognise the importance of bicycle insurance.

In March this year, the Japanese central government concluded that a system forcing cyclists to take out liability insurance would be extremely difficult to implement but added it would support the efforts of the local governments.