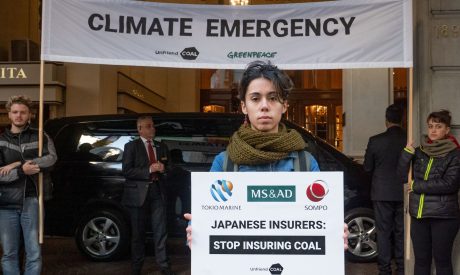 Sompo has announced it is to become the first Japanese insurance company to adopt a position on the underwriting of coal.

The group issued a sustainability statement in which it said it would cease underwriting coal fire power stations in the country. The move has been welcomed by environmentalists but they say the new sustainability strategy does not go far enough.

The new stance was revealed in a statement by Group CEO and President: Kengo Sakurada.

“Since the Paris Agreement, efforts to reduce emissions of CO2 and other greenhouse gases and realise a decarbonized society have accelerated,” he stated. “Since coal-fired power generation emits more greenhouse gases than other power generation methods, there is a growing voiced need to curb new development and shift to energy with less environmental impact, such as renewable energy.

“Under these circumstances, the Group will continue to provide insurance products and related services for renewable energy businesses such as solar power and wind power, and actively support innovation by companies working to reduce CO2 emissions. In addition, Sompo Japan Insurance will not insure and invest in new construction of coal-fired power plant in Japan, except for projects for which underwriting, investment and financing has already been expressed.

“In the case of a power generation with power efficiency exceeding the certain level in accordance with the energy strategy of Japanese government, it might consider to insure or invest with a careful thought confirming measures to reduce environmental impact, such as reduction of greenhouse gas emissions and alternative means.”

The group added that it would work towards encouraging greater biodiversity with a range of links with major environmental initiatives and would look to drive the issue of human rights both inside the company and with its clients and suppliers.

“For the human-cantered society in which no one is left behind, our group will consider the human rights of customers, business partners, and all other stakeholders who are involved in its global business activities, and strengthen dialogue with stakeholders in order to avoid and prevent the risk of indirect human rights issues,” added Mr Sakurada. “We expect our business partners to protect human rights based on international codes of conduct, and in the event that we identify a potential negative impact on human rights, we will encourage appropriate responses through dialogue and consultation.”

Environmental Group Insure Our Future welcomed the move to cease the underwriting of Japanese Coal Power plants but added there was more that could be done.

“This commitment comes with significant loopholes,” it said. “Sompo will apply the new policy only to the construction of coal fired power projects in Japan. Even in Japan, the policy will exempt generation projects of high power efficiency. In international projects, Sompo will, according to an article in Nikkei, follow best ESG practices ‘in anticipation of changes in global investors and international public opinion’. This will include an assessment of ‘what kind of opposition movement is expected if the business is advanced’.

Takayoshi Yokoyama, team leader of 350 Japan added: “Sompo’s announcement of the coal policy is appreciated as the first one in Japan’s general insurers. We, however, urge Sompo to increase its commitment to complete abolishment of coal fired power plants that is required to meet the 1.5 degree goal of the Paris Agreement as a responsible insurance company.”

Yuki Tanabe, Program Director at the Japan Centre for a Sustainable Environment and Society (JACSES) added: “The new policy is not applicable for overseas plants including the Vung Ang 2 coal-fired power project in Vietnam, which may be in the pipeline of Sompo’s underwriting. Sompo should completely stop its underwritings for coal projects, without any exceptions.”

“Japan continues to come under fire for its support for coal. Just recently the UN Secretary General urged Japan to give up their reliance on coal and other fossil fuels,” says Susanne Wong, coordinator of the No Coal Japan coalition. “We urge Tokio Marine and other Japanese insurers to stop insuring new coal projects and undermining efforts to address the climate crisis.”

SHARE:
Cyber demand has to be met by capacity – WTW

Energy firms under fire over climate promises
Scroll to top