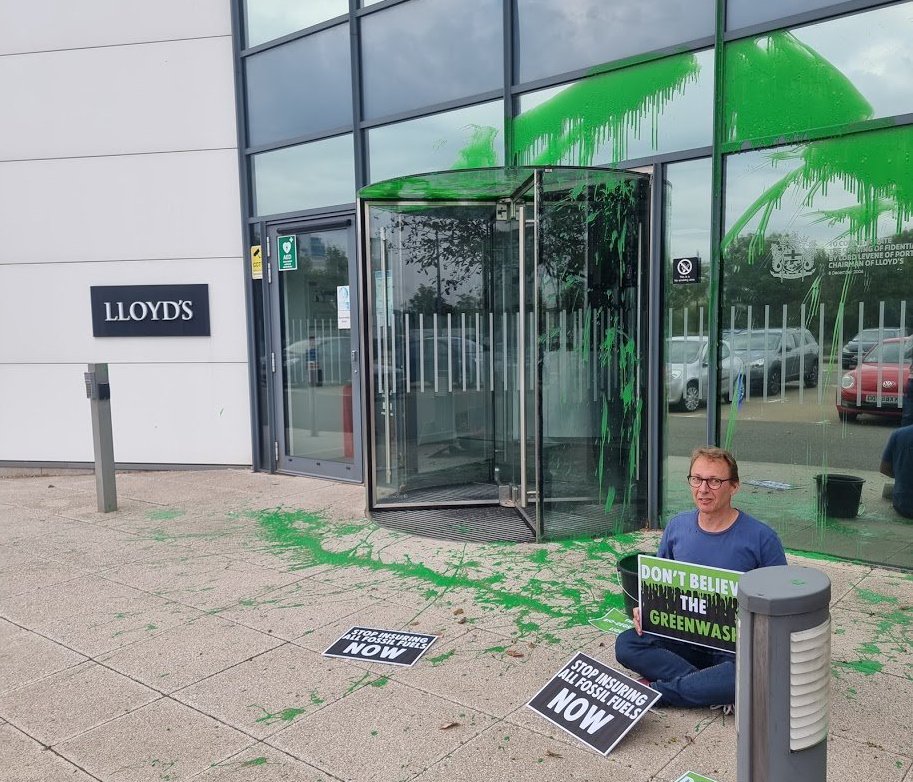 Climate activists have again targeted Lloyd’s in another paint attacking and called on people across the UK to target Lloyd’s and insurers which underwriter fossil fuel risks in more attacks.

Before his arrest the man said: “Lloyd’s recently published sustainability strategy merely asks their members to stop insuring thermal coal, tar sands and Arctic exploration.  Just asking their members to stop is not good enough and amounts to nothing more than greenwashing.  It allows projects such as the Adani coal mine in Australia, the Alberta tar sands pipeline in Canada and the West Cumbria coal mine in the UK to carry on with business as usual.”

In a more worryingly for the industry the group has said it is now calling on protestors across the UK to target not only Lloyd’s but other insurers.

In a statement following yesterday’s incident the group said: “Insurance Rebellion are calling for people across the UK to target Lloyd’s of London and the insurance companies that operate in their market.”

The group said the world’s oldest insurance market is in its crosshairs following its statement last week on its efforts to reduce its exposure to fossil fuels, which it said did not go anywhere near far enough.

Insurance Rebellion spokesperson Lisa Clarke said: “Lloyd’s new road map is yet more greenwash, it’s the kind of action the world needed decades ago. In 2021 to avoid destroying the planet we need to stop any new coal, oil and gas projects from going ahead, and shut down many of the existing ones. That’s what the science has been telling us for years, and that’s why we’re back today.”

It added syndicates at Lloyd’s insure around 40% of the global energy market, a very large part of this is fossil fuels.

Lloyd’s has been targeted by Insurance Rebellion multiple times in 2021. In April the group used a truck to dump fake coal outside Lime Street, setting off a stink bomb in June and now the two latest paint actions.