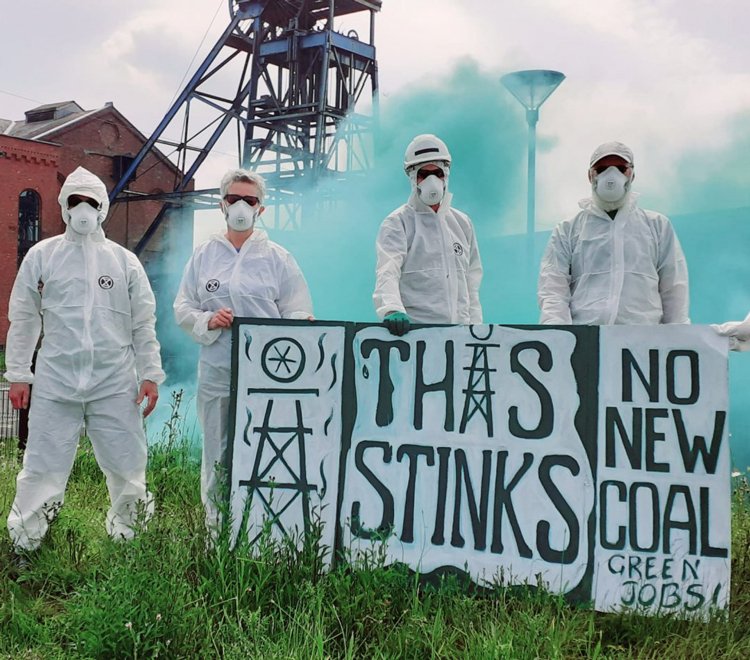 Lloyd’s made to sulphur in latest climate protest

Climate protestors have kicked up a stink at Lloyd’s over what they claim is its willingness to insure a controversial new coal facility.

Insurance Rebellion took part in a nationwide protest with Extinction Rebellion yesterday afternoon, visiting the main entrance of Lloyd’s Lime Street building where they set off a stink device.

The group said the protest highlighted its demands that the UK Government and insurance industry stop supporting the West Cumbria coal mine and all other fossil fuel projects.

The stink devices, which emitted a very strong smell of sulphur, represent the stink of the sulphur-rich coal mine, as well as the fact that the plan to build a coal mine in a climate emergency stinks.

Insurance Rebellion explained that Lloyd’s is the focus of their protests as it is already one of the biggest fossil fuel insurers in the world and many of its syndicates are actively considering insuring the highly polluting Cumbrian coal mine among many other “ecocide”  projects. Insurance Rebellion explained this is possible despite Lloyd’s coal exclusion policy because it allows the syndicates to take on new business in coal for the whole of 2021 and keep that business until 2030, while not limiting oil and gas insurance at all.

One of the protesters said “Lloyd’s of London’s reputation is taking increasing damage. It markets itself as a green institution, with its Instagram feed showing lots of photos of solar panels, but all the while it’s insuring the most polluting projects on the planet. Tar sands, new coal mines, drilling for oil in the Arctic – you name it, Lloyd’s is enabling it.

“The UK is getting ready to host COP26 but is a complete hypocrite of a host – our government, financial centres, and insurance industry are funding and enabling new fossil fuels like there’s no tomorrow, and if they carry on, there really won’t be a tomorrow. Their contempt for science and the lives of people in the UK and all over the world in pursuit of profit is shocking.”

The protests kicked off two weeks of planned actions across the country in the run-up to the G7 Summit, aiming to draw attention to government and institutional failure over the climate crisis. The summit is an annual gathering of government leaders from seven of the world’s richest nations, which this year is also being hosted by the UK and is expected to focus on Covid recovery and the climate crisis. Protestors are targeting the summit as a way to get the major economies, and particularly the UK, to take urgent action.

The Cumbrian coal mine was originally approved by the Cumbrian local government but was then postponed to be considered at by a public inquiry in September this year. “The results of the inquiry won’t be acted on until after COP26, so this has effectively allowed the Government to delay the decision to avoid embarrassing itself on the world stage,” added the group.

Insurance Rebellion said that the coal from the Cumbrian mine has been reported as intended for use in steelmaking in the UK, but British Steel has confirmed that it will not be able to use the steel because of its high sulphur content, meaning 90% of the coal extracted would actually be exported. It is also known that the use of coking coal in steelmaking could and should be displaced completely by 2035 to achieve climate deadlines, well before the planned retirement date of the mine in 2049 (just one day before the UK’s current net-zero target date).

Insurance Rebellion said that investing in the coal mine will only slow down the immediately necessary decarbonisation of steel, making it much harder for global temperature rises to be held to the safe level of 1.5°C.

Anti-terror chief urges risk managers to take a lead in fight against threa...
Scroll to top