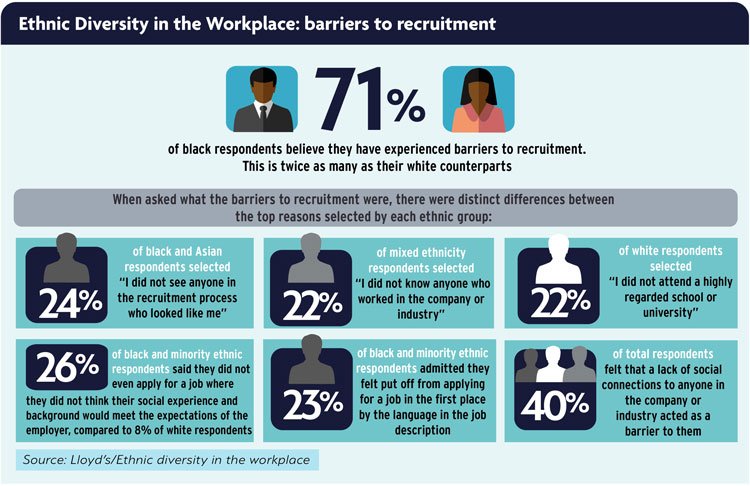 Lloyd’s has produced the report with the support of Inclusion@Lloyd’s, the market-wide steering group for diversity and inclusion governance and best practice. It is part research report and part practical blueprint for change.

Using personal stories and data collected from over 900 employees market-wide, it highlights the experiences of black and minority ethnic colleagues in the market to bring different perspectives into focus. By using a data-driven approach, Lloyd’s claims to be grounding this report in the current reality and setting a benchmark from which to measure future progress.

Amongst its key findings were that 39% of black respondents felt undervalued at work. Black and minority ethnic (BAME) staff were twice as likely to feel undervalued than their white colleagues, the survey found.

Meanwhile, the study also said 63% of black respondents consider visible representation of black people in an organisation a key factor in applying for a role, while a commitment to diversity and inclusion (D&I) increased the likelihood of an application for 69% of participants.

According to the report, if work has been done to ensure the sector is more attractive to diverse talent, further work must then be done to ensure that unjust biases in the recruitment process, which might prevent talented individuals from entering the market, do not exist.

As an industry built on relationships, insurance is often perceived as a sector that recruits through personal connections. 40% of total respondents felt that a lack of social connections to anyone in the company or industry acted as a barrier to them.

Many also called out that perceived bias and discrimination in the recruitment process took place because of their names. In answering what barriers had been experienced in recruitment, one anonymous respondent answered: “In my personal opinion my first name (which is of African descent) regardless of my education (MSc), professional (Dip CII) qualifications and experience”.

Many firms have embarked on a rigorous journey to make recruitment processes more transparent and robust, but if these barriers still exist, even if perceived, it is clear more needs to be done to ensure biases are addressed at every decision point of the recruitment process.

This includes the very first step of the recruitment ladder: job applications. 1 in 4 black and minority ethnic respondents say they have not applied for a role because they felt put off by the language in the job description. Care must be taken to ensure that language is inclusive and not biased, intimidating or confusing.

In 2017 the Parker Review challenged the FTSE 100 companies to appoint at least one non-white director by 2021. Only 52 companies have metthis target but there has been
an improvement: 11 additional FTSE 100 companies now have an director from a minority ethnic group on their board.

Put pressure on recruiters to deliver diverse candidate shortlists that are consistent and not tokenistic, and allow the time for recruiters to seek out the right candidates.

Think about how the language used in job descriptions might attract or deter diverse talent. Jargon-filled descriptions can be intimidating to those new to the market. Similarly, over-use of adjectives or demanding certain personality traits are likely to mean you will only attract one type of person.

Diverse interview panels are more likely to call out unconscious bias and avoid falling into the trap of hiring someone who looks like them. For senior hires, invite junior staff or diversity champions* to be part of the interview panel to assess the candidate’s commitment to inclusivity. Small firms could consider bringing in external support to ensure diversity in an interview panel.

Everyone has unconscious biases but by understanding them better, those involved in the recruitment process can work to avoid biases influencing any stages of the decision-making process.

Use bigger data to understand candidates’ achievements in context. Getting the right talent may involve bringing in talent from other sectors with relevant experience. At entry level this means helping you see experience that is not directly industry related, that might previously have been a barrier for the candidate, in a different way. Firms like Rare Recruitment can help you with this process.

Senior leadership hires should be thorough and inclusive to avoid falling into traps of hiring immediate contacts. A succession plan for how to fill gaps at the leadership level is one way to avoid this.

As the old adage goes “What gets measured gets done”. KPIs set for leaders from black and minority ethnic backgrounds can provide the impetus for important changes needed to create a more diverse leadership team.

“The success of our market depends as much on creating the best environment for our people and setting a framework for the most inclusive culture, as it does on executing our performance and strategic priorities,” said John Neal CEO of Lloyd’s.

“A key element of inclusivity is ethnic diversity, and through sharing the personal experiences  of more than 900 employees in the Lloyd’s market today, this report is a valuable contribution to our ongoing understanding of what we need to do to create a truly inclusive market.”

Pauline Miller, head of talent development and inclusion at Lloyd’s, added: “When I first arrived, there were very few role models that looked like me and whilst this is often still the case, I am encouraged by the progress being made more broadly across the diversity and inclusion agenda. The insurance sector has woken up and over the last few years has made huge strides in creating an environment that is more inclusive and more welcoming for a diverse range of professionals, including those from minority ethnic backgrounds.”

“However, this report shows that there is clearly more to do.”

The full report can be accessed here: https://inclusionatlloyds.com/wp-content/uploads/Ethnic-Diversity-in-the-Workplace-Report-FINAL.pdf

SHARE:
Zeta set to make landfall in one of the busiest hurricane seasons on record