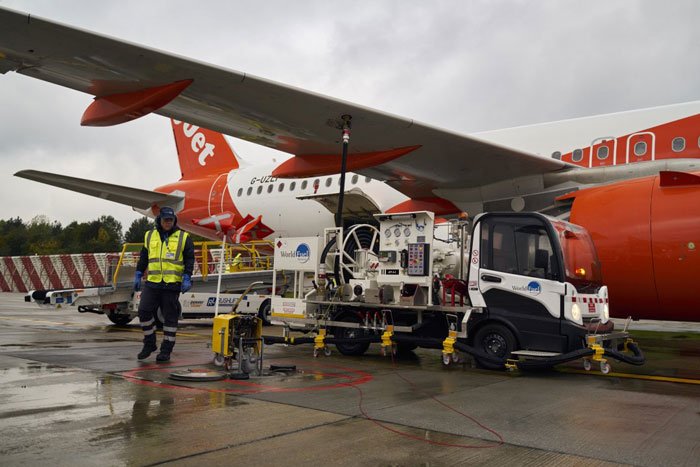 The owners of Gatwick Airport has hailed a new era in more environmental aviation after the take off of the first commercial flight to use sustainable aviation fuel (SAF) from the airport.

Under a collaboration between the airport, easyJet, Q8Aviation, and Neste a total of 42 easyJet flights operating from Gatwick Airport are to be powered by a 30 percent Neste MY Sustainable Aviation Fuel blend.

Described as an “important milestone,” the journey marked the first time a departing flight at Gatwick has used sustainable aviation fuel (SAF) and is also the first usage by any easyJet service from the UK.

Of the 42 flights running Neste MY Sustainable Aviation Fuel blend, 39 of these will be the easyJet flights operating from Gatwick to Glasgow throughout the COP26 Climate Change Conference, from 31 October to 12 November. Across all 42 flights CO2 emissions will have been reduced by up to 70 tonnes.

Tim Norwood, Director of Corporate Affairs, Planning and Sustainability of Gatwick Airport said: “We are pleased to work with our partners to be the first airport in the VINCI Airport network to introduce SAF on a commercial flight and prove the concept that Gatwick is ready and able to operationally utilise SAF.  SAF is one of several ways that UK aviation and Gatwick will reach net zero carbon by 2050, alongside carbon offsets, airspace modernisation and continued innovation in aerospace technology, including electric, hydrogen and hybrid aircraft systems.  With smart Government policy to underpin investment in cost competitive UK SAF production, many more flights could be using UK produced SAF by the mid-2020s.”

Neste’s sustainable aviation fuel is produced from 100% renewable and sustainable waste and residue raw materials, such as used cooking oil and animal fat waste. In its neat form and over its life cycle, Neste MY Sustainable Aviation Fuel can achieve a reduction of up to 80% of greenhouse gas emissions compared to fossil jet fuel use.

“The incorporation of SAF into Gatwick’s operations for today’s flight is an important proof of concept for the airport in demonstrating its continued commitment to work with its aviation partners on decarbonisation,” said the airport in a statement. “Gatwick’s own 2019 carbon footprint showed that the airport is already half-way to net zero for its own operations and is committed to achieving Net Zero direct emissions by 2040.”

Jane Ashton, Director of Sustainability at easyJet explained: “At easyJet, we want to play our part to lead the decarbonisation of aviation. We’re pleased to announce that today we’re operating using SAF in a proof of concept flight from Gatwick having also committed to using a SAF blend on all flights operating from Gatwick to Glasgow throughout COP26, thanks to a collaborative effort with our partners involved in this project.

“The availability of SAF still needs to grow but they will be an important interim solution in our decarbonisation pathway, while we are supporting the development of zero-emission aircraft, which will be the most sustainable solution for short-haul networks such as our own in the long term. In the meantime, we are operating our flights as efficiently as possible and are currently the only major European airline to offset the carbon emissions from the fuel used for all our flights, which has an impact right now.”