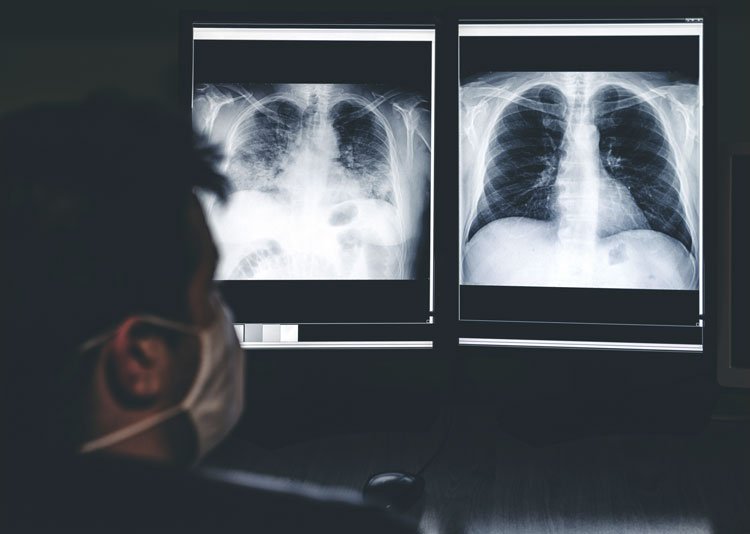 Research by Oxford University suggests that COVID-19 could be causing lung abnormalities still detectable more than three months after patients are infected.

The research is the latest significant study to highlight the possible long-term effects of COVID-19.

Only last month it was suggested that ongoing illness after infection with Covid-19, or ‘long Covid’, may not be one syndrome but possibly up to four, causing a rollercoaster of symptoms affecting all parts of the body and mind, according to analysis published this morning.

In its initial report about long-term Covid-19, Britain’s National Institute for Health Research (NIHR) said one common theme among ongoing Covid patients – some of whom are seven months or more into their illness – is that symptoms appear in one physiological area, such as the heart or lungs, only to abate and then arise again in a different area.

Now another reputable study has added weight to the NIHR’s claims.

The study of 10 patients used a novel scanning technique to identify damage not picked up by conventional scans.

The Xenon technique sees patients inhale the gas during the MRI scan.

Professor Fergus Gleeson, who is leading the work, tried out his scanning technique on 10 patients aged between 19 and 69.

Eight of them had persistent shortness of breath and tiredness three months after being ill with coronavirus, even though none of them had been admitted to intensive care or required ventilation, and conventional scans had found no problems in their lungs.

The scans showed signs of lung damage, by highlighting areas where air is not flowing easily into the blood, in the eight who reported breathlessness.

The results have now prompted Professor Gleeson to plan a trial of up to 100 people to see if the same is true of people who had not been admitted to hospital and had not suffered from such serious symptoms.

He is planning to work with GPs to scan people who have tested positive for COVID-19 across a range of age groups.

The aim is to discover whether lung damage occurs and if so whether it is permanent, or resolves over time.

He said: “I was expecting some form of lung damage, but not to the degree that we have seen.”

The risk of severe illness and death increases markedly for the over 60s. But if the trial discovers that the lung damage occurs across a wider age group and even in those not requiring admission to hospital “it would move the goalposts,” according to Prof Gleeson.

He believes the lung damage identified by the Xenon scans may be one of the factors behind so called ‘long COVID’, where people feel unwell for several months after infection.

The scanning technique was developed by a research group at the University of Sheffield led by Professor James Wild who said it offered a “unique” way of showing lung damage caused by COVID-19 infection and its after-effects.

“In other fibrotic lung diseases we have shown the methods to be very sensitive to this impairment and we hope the work can help understand Covid-19 lung disease.”