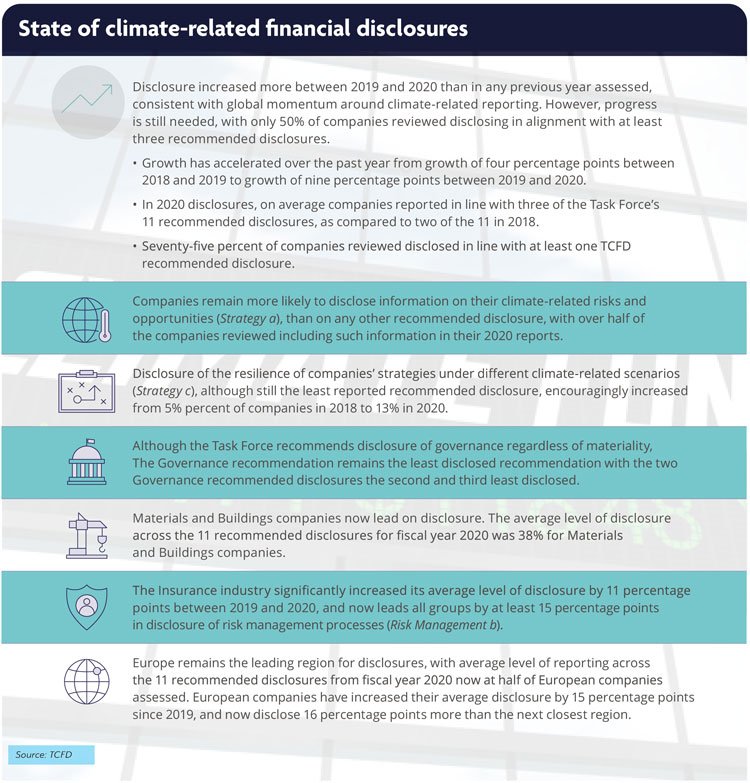 For the first time, over 50% of companies reviewed disclosed their climate-related risks and opportunities, according to the 2021 Status Report published by the Task Force on Climate-related Financial Disclosures (TCFD).

After reviewing over 1,650 companies’ reports, from 69 countries and jurisdictions in eight industries, the Task Force, established by the Financial Stability Board (FSB), found that disclosure in line with the TCFD’s recommendations has accelerated over the past year and grown nine percentage points from 2019-2020 compared to the four percentage point growth from 2018-2019.

This growth was bolstered by official announcements of TCFD-aligned climate reporting requirements from several jurisdictions as well as support for TCFD from investors, international standard setters and regulators.

However, despite the significant progress, overall disclosure is still lacking, according to the body.

“When companies disclose clear, consistent and accurate information on the risks they face from climate change, investors and business leaders can make more informed and sustainable financial decisions,” said Michael Bloomberg, chair of the Task Force and founder of Bloomberg. “That strengthens our global economy, improves health, and helps address the climate crisis.”

He added: “The Task Force has had an exceptional year in rallying global support for climate risk reporting – but we still have a long way to go. As governments and businesses around the world work to accelerate the transition to a clean energy economy, they should continue to draw on the TCFD recommendations as a critical tool in their efforts.”

Since last year’s report, the number of TCFD supporters has grown by over a third – more than 1,000 new organizations now support the TCFD recommendations, bringing the total to over 2,600 globally. TCFD supporters now span 89 countries and jurisdictions and nearly all sectors of the economy, with a combined market capitalization of over $25.1 trillion – a 99% increase since last year.

According to the body, as support from the private sector has grown, governments and organizations around the world are moving toward requiring climate disclosures through legislation and regulation. In this year alone, it said, official entities in eight jurisdictions have referenced the TCFD in announcements to require climate-related reporting.

International standard setters and regulators have also expressed support for aligning their efforts with the TCFD recommendations, including the G7 and G20 Finance Ministers and Central Bank Governors, the IFRS Foundation and the European Commission, among others.

“There is clear and growing consensus among investors and regulators on the importance of climate-related disclosure and the need for standardized, transparent data to support capital allocation decisions,” commented Mary Schapiro, head of the TCFD Secretariat and vice chair for Global Public Policy at Bloomberg.

“As countries and companies around the world set net zero targets, the TCFD framework is increasingly becoming the foundation for standards and requirements needed to chart the transition to the low-carbon economy. That’s why we are also publishing guidance to help companies disclose their plans and progress for the transition to a low-carbon economy, more consistent cross-sector metrics, and, for financial firms, how aligned their portfolios are with a well-below 2°C scenario.”

“The TCFD recommendations have become widely supported by the private and official sectors as the basis for climate-related disclosures, and this year’s report shows further momentum but also where disclosure gaps remain,” he said.

“As the IFRS Foundation continues to develop a global sustainability reporting standard, working with an alliance of standard-setters, I am pleased that it will be able to draw from the strong work of the TCFD.”

Recognizing that climate-related reporting has evolved since the Task Force initially released its recommendations in 2017, the TCFD has also published two additional documents to support decision-useful disclosure. For the first time, the Task Force released updates to the implementation guidance (Annex) initially published in 2017 with the TCFD Recommendations Report.

The revised 2021 Annex updates specific elements of the implementing guidance for all sectors and supplemental guidance for the financial sector for certain recommended disclosures within the Strategy and Metrics and Targets recommendations.

The Task Force has also published Guidance on Metrics, Targets, and Transition Plans to further support financial statement preparers in disclosing decision-useful information and linking those disclosures with estimates of financial impacts.

The full 2021 Status Report, updated Annex, and guidance document are available on the TCFD website. The Task Force will deliver its next status report to the FSB in September 2022. 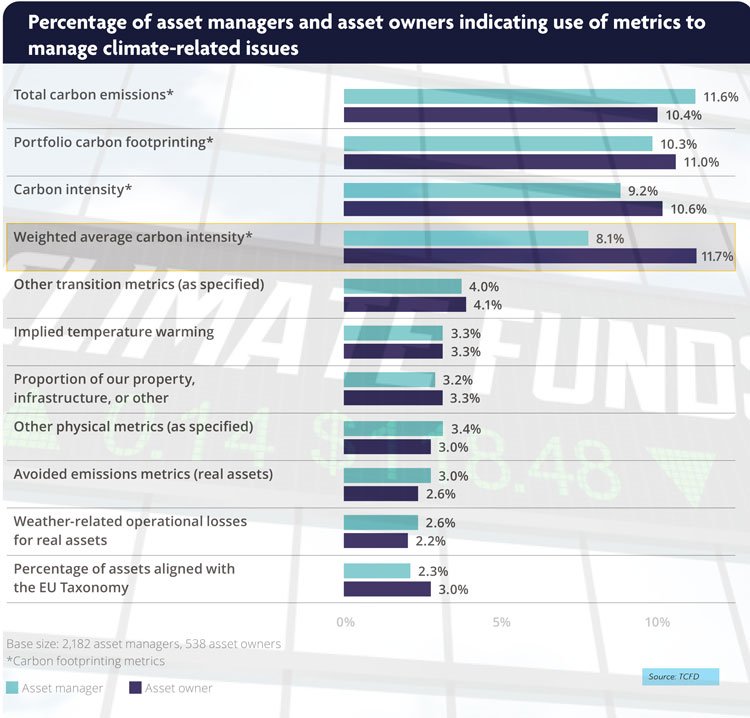 International standard setters and regulators have also expressed support for aligning their efforts with the TCFD recommendations, including the G7 and G20 Finance Ministers and Central Bank Governors, the IFRS Foundation and the European Commission, among others.