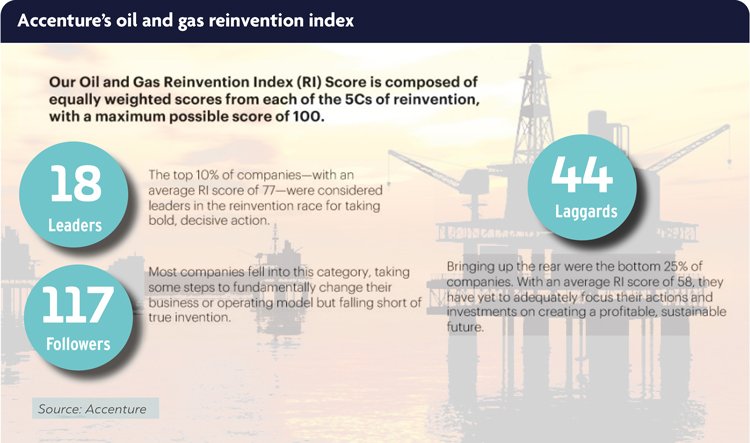 Oil and gas companies that commit to reinventing themselves over the next three years as a result of the COVID-19 pandemic are expected to grow their revenues and margins at twice the rate of companies least committed to reinvention.

In a new study of the sector Accenture surveyed more than 200 oil and gas executive to examine their approach to a future energy strategy and warn that the next decade will make or break firms according to their ability to transform their businesses.

The report, titled “Necessity is the Mother of (Re)invention” also introduced Accenture’s “Reinvention Index,” which analysed the companies across key factors related to reinvention. It classified the 10% of companies that scored the highest in the Index — who are setting the pace for reinvention through bold and decisive action — as reinvention “Leaders,” with those in the bottom 25% were labelled “Laggards.”

“This decade will be a make-or-break period for the oil and gas industry, which remains rutted in a low-price environment, but the opportunities presented in the report provide a blueprint for reinvention for continued success,” said Muqsit Ashraf, a senior managing director at Accenture who leads its Energy industry group. “All oil and gas companies should aim to emulate the reinvention Leaders to maintain relevance during and after the energy transition. Otherwise, the transition will transform from an opportunity to build a sustainable and profitable future to an existential risk.”
And reinvention could drive substantial rewards according to Accenture. For instance, Leaders expect minimum margin growth of 7%, on average, in the next three years, more than double that of the Laggards (3%), and expect to grow revenues over the same period by at least 11%, compared with just 6% for the Laggards.
“Competition from new energy sources, environmental accountability, talent scarcity, investor apathy and the COVID-19 pandemic have led most oil and gas companies to realise the need to transform to ensure profitability, embrace sustainability and maintain their relevance,” said Ashraf. “What’s required isn’t just piecemeal transformation but wholesale business reinvention, which is anchored in a new approach that we call our ‘5C’ model.”
The Accenture ‘5C’ model for reinvention addresses:

The report added that attaining carbon neutrality, in particular, is a key facet of the reinvention required to thrive in today’s era of accelerated energy transition. In fact, more than a third (37%) of respondents, including all the Leaders, expect margin improvements of 20% or more from their low-carbon businesses in the next three years. Refocusing investments, operations and products will be key, with 97% of all respondents citing environmental performance as a priority and one-third (33%) naming it their top priority.
Accenture added: “The Leaders are already making some headway in this area; almost all (96%) have set ambitious environmental, social and corporate governance (ESG) targets, with the same number committed to reporting frequently on their emission-reduction progress. In contrast, only 56% of Laggards have set targets, with less than half (47%) regularly publicizing their results. Additionally, all Leaders expect ESG performance to have, at the minimum, a strong impact on their competitiveness over the next three years.”
Hydrogen and renewable power were identified as the two low-carbon businesses with the most growth potential. In fact, more than half of Leaders expect hydrogen (cited by 62%) and renewable power (54%) to account for more than 7% of their revenues within the decade.