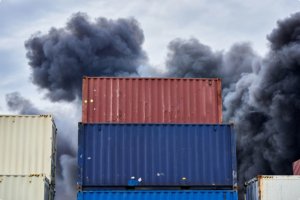 Figures from the International Union of Marine Insurance (IUMI) on global marine premiums for 2018 saw a 1% increase, a figure which highlights the pressure on rates.

The Organisation presented its analysis of the latest marine insurance market trends at its annual conference in Toronto. It reported underwriting premiums for 2018 stood at $28.9 billion.

Against a backdrop of major losses and greater regulatory pressure the figures will only heighten the concern around the sustainability of rates.

Vice-Chair of IUMI’s Facts & Figures Committee, Astrid Seltmann said: “Changes to frame conditions are the most likely reason for the modest increase in premiums as opposed to any real market development. A continuing growth in world trade will have driven cargo premiums up by 2.5%; and the fluctuating oil price will be pressurising premiums from the offshore energy sector which dropped by 3% in 2018.

“Ongoing global uncertainties, including the current tensions in trade, will continue to impact all sectors but specifically cargo and offshore energy. The continued downward adjusting of global trade growth is not helpful for marine cargo underwriting going forward.”

She added: “High levels of technical losses continue to blight all sectors, particularly hull and cargo, and 2018 will not be any different. A normalization of major losses after several relatively benign years is likely to offset any rise in premiums achieved this year. Premiums had already plummeted to truly unsustainable levels in 2017 and so any increase begins from a very low base. Only when the 2019 statistics become available will we understand to what degree marine underwriting might have returned to profitability.

“A particular concern is the increase in the frequency of fires on containerships, particularly those starting in the cargo area of vessels such as the Mærsk Honam or the Grande America. This trend has been observed for some years and the newest statistics show a clear further increase in 2019. These fires pose a threat to the crew and cause severe damage to both vessel and cargo. IUMI is working with a range of industry bodies to improve the prevention of such events as well as fire-fighting capabilities onboard”.

Premium income for marine cargo insurance was reported to be $16.6 billion for 2018, representing a 2.5% increase on the 2017 result. The modest increase is largely attributable to continued growth in world trade coupled with exchange rate fluctuations which tend to affect cargo premiums more strongly than other sectors.

Trade growth continues (albeit less optimistically) which should impact positively on this sector, macro-economic uncertainties such as national and regional trade restrictions as well as changes to economic and political frame conditions are likely to have a negative effect.

Global underwriting premiums for the hull sector achieved for 2018 were $7 billion, no change from 2017.

“A 0% change in premiums is a concern when set against a continually increasing global fleet and higher single risk exposure (and the related risk of unprecedented major claims) resulting from the trend for ever-larger vessels,” said IUMI.

On a more positive note, claims frequency and cost per vessel is stable at a moderate level; and the long-term trend for total losses has also stabilised with a fluctuation below 0.1%. However, the incidence of major losses appears to have returned in 2019 after unusually low numbers during the period 2016-2018. This is likely to impact on the 2018 and 2019 underwriting years.

“In addition, the 2018 fire at a major yard in Germany represented a new dimension of claims impacting the builder’s risk portfolio. Although (due to long-term policies) it severely deteriorated the 2014 underwriting year results it may, nonetheless, add further pressure on the necessary recovery of the hull insurance market,” added IUMI.

Philip Graham, Chair of IUMI’s Facts & Figures Committee added: “Since the 2018 IUMI conference, we’ve seen around 20 entities cease or severely restrict their hull or cargo underwriting activities. Whilst the modest growth in 2018 global marine underwriting premiums recorded this year is, of course, welcome it does not demonstrate any significant uplift to the current market and is more likely to have been driven by economic factors.

“That said, I am hopeful that 2019 will bring more positivity. The hull and cargo markets appear to have bottomed-out and we are beginning to see a modest uplift, albeit from a low base. Profitability is likely to be pressured by the recent return of major losses, however. More activity in the offshore energy markets is also good news, but reactivation of units adds to the overall risk profile.

“In short, the marine underwriting sector is characterised by uncertainty. At a macro-level this is created by political, economic and environmental factors; and at an industry level it is due to accumulations, a worrying and increasing incidence of major losses; and through a reactivation of the offshore sector.”