The announcement of the blueprint to transform the way it does business, a zero tolerance strategy on market culture and misbehaviour, were launched alongside the ongoing determination to drive performance and eradicate poorly priced business.

CEO John Neal (pic below) told the media in Monte Carlo that he was determined to see the three delivered and it was a target he was not prepared to move.

“Two out of three would be failure,” he told journalists.

Thankfully for Lloyd’s at present there is no cast iron timetable set for any of the three initiatives.

The focus on performance is an ongoing programme, and the blueprint will be delivered in stages with no end-date yet set. Culture change is likely to be a lengthy process, although with every tale of sexism, and poor behaviour leaked into the media the pressure will grow.

However, Mr Neal’s optimism over the ability to deliver all three simultaneously shared by the Society of Lloyd’s is not matched by some of those in the wider market.

Indeed Mr Neal and Lloyd’s senior management have been harshly dubbed the “The City Corbyn and laboured”.

The link between the world’s oldest Insurance market and the soon to be ex-leader of the Labour party and the party itself could be seen as a difficult one.

However, worryingly for the Lloyd’s market the reason behind the Corbyn link is not over his political viewpoint but his party’s performance in the 2019 general election.

“Like Jeremy Corbyn and Labour’s manifesto, John Neal and his team have spent the past six months promising ever more ambitious initiatives,” one market participant told Wise Guy. “The electorate didn’t believe it could be delivered and as such they were heavily beaten in the polls. There are many in the market who think the chances of delivering on all of those promised initiatives are slim to non-existent.”

Without doubt Lloyd’s will believe that it can deliver a triple whammy to the market.

The biggest hurdle, according to market practitioners, will be some of the targets included within the Blueprint for Lloyd’s. They point to the series of  much-lauded previous schemes from Kinnect to Limnet, hailed as the market’s processing solution only to fail.

Mr Neal and his team will no doubt see themselves more akin to Prime Minister Boris Johnson and the ERG who after three years of campaigning finally have Brexit within their grasp.

That success is down to the Conservative’s landslide election victory based on the mantra “Get Brexit Done”.

For Lloyd’s it is now a case of “get the blueprint done”, “get cultural change done,” “get enhanced performance done”. Two out of three will be failure. 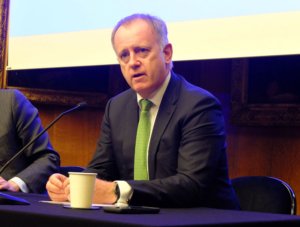