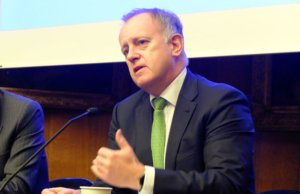 Lloyd’s has launched a campaign designed to encourage people to speak up on bad behaviour as it seeks to drive home its campaign on cultural failure.

It said the new scheme aims to encourage more people to speak up against unacceptable behaviour as part of a programme of measures put in place to address the findings of Lloyd’s Annual Cultural Survey and accelerate progress towards a culture of integrity, respect and inclusion across the Lloyd’s market.

John Neal, Lloyd’s CEO, (pic) said: “At Lloyd’s we expect all market participants to act with integrity, be respectful and always speak up. I hope this campaign encourages more people to do so. You will be heard, you will be supported, and we will act, because no matter what form it takes, harassment is never acceptable.

“The ambition here is to make a positive difference in many people’s lives, by empowering individuals to act and intervene when they witness unacceptable behaviour. I think everyone has a role to play. Lloyd’s leadership is fully committed to transforming the culture at Lloyd’s with shared values that will shape the behaviours, choices and actions of everyone in the marketplace.”

The move comes after the Lloyd’s cultural survey found that one in eight respondents had witnessed what they considered to be sexual harassment in the market over the past 12 months. It also found there was still viewed to be a drinking culture and that many feared that if they did speak out they did not expect a great deal of action from senior management. The survey found 38% of respondents did not know who to raise concerns to in the Lloyd’s market and only 45% of people felt comfortable enough to raise a concern.

When he launched the results of the survey Mr Neal made it clear that individuals and companies who failed to uphold the required standards would be excluded from the market. Companies were also warned that they could be named and shamed if they did not sign up to the market’s efforts to improve culture.

In a statement Lloyd’s said the campaign aims to highlight the importance of speaking up and provide clear guidance on how individuals can take action if they see or experience unacceptable behaviour.

“High impact advertisements, banners, and vinyl posters will feature prominently within the Lloyd’s building in London as part of the campaign, together with easily accessible guides, online information (Lloyds.com/speakup) and resources, as well as a 24/7 Advice Line (0333 212 3510), available to anyone who works in the Lloyd’s market,” it added.

The #SpeakUp campaign seeks to directly address the Lloyd’s Annual Culture Survey findings that 38% of respondents did not know who to raise concerns to in the Lloyd’s market and only 45% of people felt comfortable enough to raise a concern. 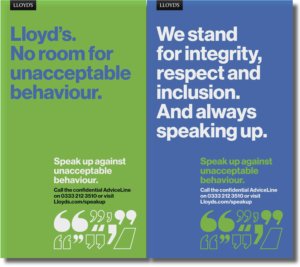