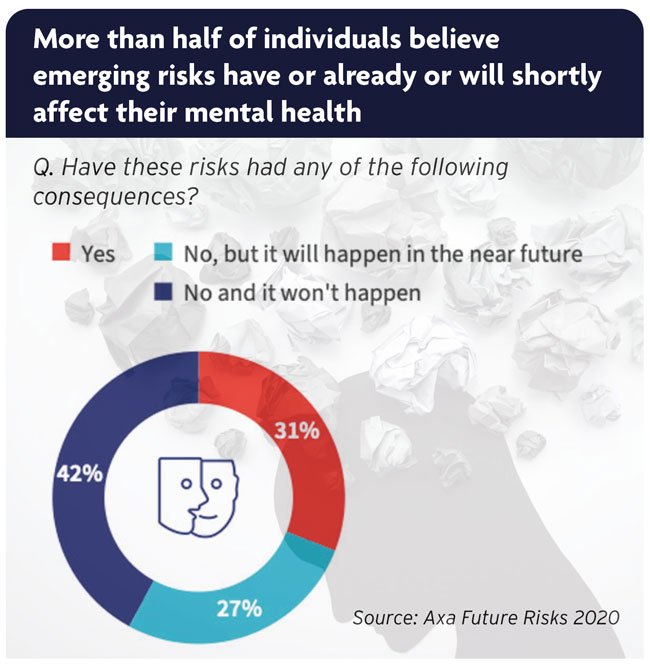 Mental health and misinformation may be two risks that are currently being widely underestimated, in much the same way that pandemics and infectious diseases were only considered the eighth-most-important emerging risk last year, according to Axa.

The observation was made as part of this year’s ‘Axa Future Risks Report’ which sees pandemics and infectious diseases become the number one emerging risk.

The report surveyed over 2,700 risk experts from 54 countries.

According to Axa, “although pandemics and infectious diseases were only considered the eighth-most-important emerging risk last year, we flagged it as an under-the-radar threat that had the potential to cause significant disruption”.

“This year, we highlight two additional risks that may be underestimated for now: mental health and misinformation. These are not new, yet both threats have the potential to grow exponentially in the aftermath of Covid-19.”

Only 7% of surveyed experts identified changing health practices and new occupational diseases, including mental health, as a major emerging risk to society, meaning it does not even enter the top 20 most- important threats.

However, as Axa said, mental health challenges must not be overlooked:

“Depression affects 264 million people globally. Suicide is the second-leading cause of death in those aged 15–29, and more than one in five people that live in a region impacted by conflict have a mental health condition.1 The human cost is vast, but so too is the impact on the economy: depression and anxiety cost the global economy more than $1tn per year.”

Although the scale of the mental health crisis was apparent before Covid-19 unfolded, the United Nations predicts that the pandemic has the potential to make the situation much worse, potentially causing a major global mental health crisis that will affect children, young people, and healthcare workers.

In addition to the trauma caused by disease and death, social isolation and economic uncertainty have heightened anxiety and depression.

As Axa points out, the likely effects here are reflected in its survey data: 58% of surveyed individuals say that emerging risks are already affecting their mental health or that they will in the future. Individuals in Hong Kong, Japan, China, and Australia are most likely to say that emerging risks are already or will soon affect their mental health.

Furthermore, public investment in prevention and treatment services has not kept pace with the growing problem. As the report notes, countries, on average, spend just 2% of their health budgets on mental health so it is “no wonder 81% of experts do not believe public authorities are prepared for the emergence of health-related risks”.

Businesses can play a role here, however:

“A lot of companies look after their employees’ health through offering health insurance, which is useful, but primarily focuses on physical health,” explained Karima Silvent, Axa chief human resources officer.

“Companies can do more on mental health by educating managers about it because, while they can’t necessarily solve the issue, they can be equipped to identify and discuss issues with employees and direct them to where they can receive support.”

By addressing mental health as a key component of the response to the pandemic, countries, businesses, and the general population can emerge much more informed about mental health and better prepared to identify and treat conditions when they arise, according to Axa.