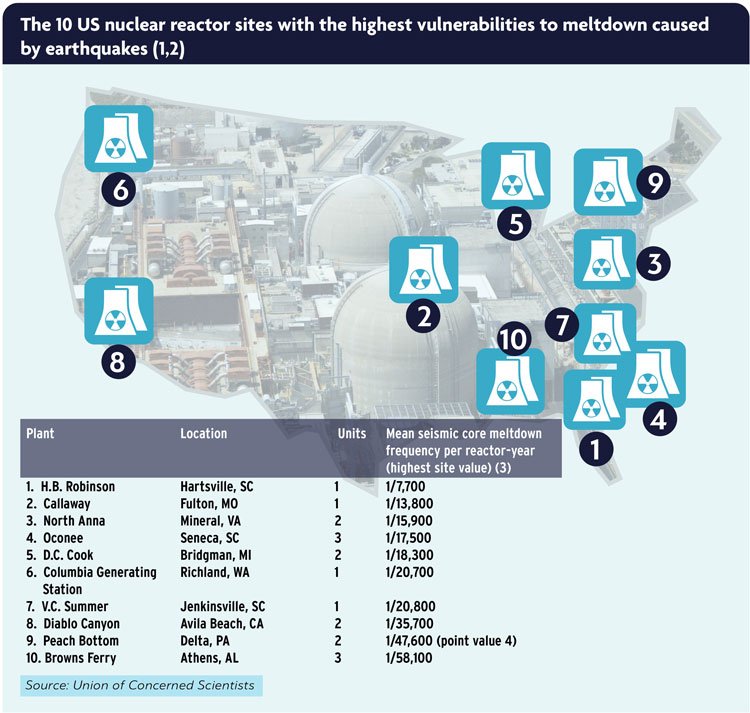 The US nuclear power reactors facing the highest risks of a meltdown from earthquakes are not in tremor-prone California, but states including South Carolina and Missouri, according to an analysis of data presented to the US nuclear regulatory agency.

The data set was requested by the US Nuclear Regulatory Commission (NRC) as part of its response to the 2011 Fukushima Daiichi meltdown accident in Japan.

Following the Fukushima incident, the NRC ordered nuclear reactor operators across the States to conduct studies to revise and update the seismic hazard profiles at their sites.

The studies are known as seismic probabilistic risk assessments (SPRAs).

The analysis of data has been collated by the Union of Concerned Scientists (UCS).

The UCS is not-for-profit advocacy organisation founded at the Massachusetts Institute of Technology in 1969, with membership subscriptions contributing some $27.2mn to total operating revenues of $39.5mn in 2019, according to its annual report.

Robinson was one of seventeen nuclear plants that the NRC identified as having the largest differences between the severity of the seismic hazards revealed by the new studies and the original hazards that were assumed when the plants were designed and licensed.

Duke Energy’s internal risk assessment submitted to the NRC found that, on average, there is a one in 7,700 chance per year that an earthquake could cause a meltdown at Robinson.

The risk is five times higher than the average estimated risk for each of PG&E Corporation’s Diablo Canyon’s two reactors in earthquake-prone California, which are scheduled to be shut in 2024 and 2025 respectively.

A Duke Energy spokesman stressed that all the Duke nuclear plants are in compliance with NRC requirements for earthquakes, and the company has bolstered its structures, systems and components.

The NRC is also satisfied that Duke has made “binding commitments” to install permanent fixes at Robinson and “seismic risk insights could be useful in future license renewal reviews,” the spokesman added.

However, the UCS report has taken a different tack, noting that “Duke plans to make modifications to reduce the vulnerability of the emergency backup (FLEX) equipment and emergency water sources so that they would have greater chances of surviving an earthquake”.

However, it also suggests that “this is a poor substitute for structural reinforcements”.