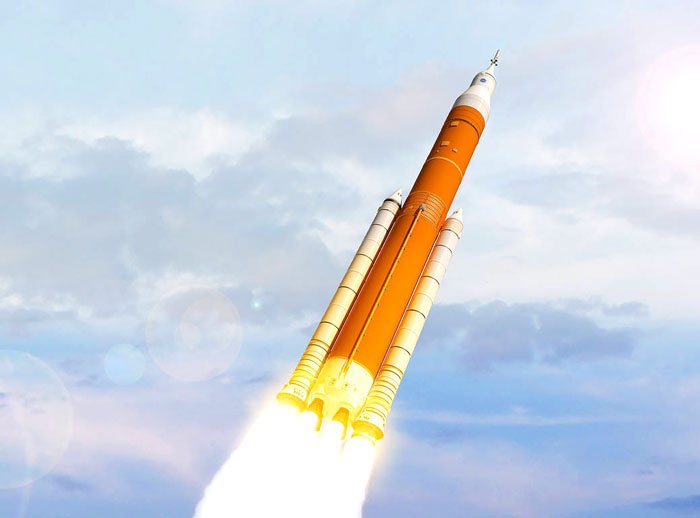 In one of the most exciting developments for space exploration since the heady days of the Apollo programme some 50 years ago, NASA’s next generation Moon rocket – the Space Launch System (SLS) – is set to enter a last series of critical tests.

After a decade of development, the SLS is now approaching a crucial stage. A year-long programme of testing for the core stage is coming to an end. Called the Green Run, it’s designed to iron out any issues before the rocket’s maiden flight, scheduled for November 2021.

In southern Mississippi, near the border with Louisiana, tests have been taking place on the grounds of Stennis Space Center, a NASA facility outside the city of Bay St Louis in Hancock County.

The core stage for the SLS measures some 65m (212ft) from top to bottom, and consists of the liquid-fuelled core stage – with four powerful RS-25 engines at its base – and two solid fuel boosters which are strapped to the sides.

The fully assembled vehicle provides the massive thrust force necessary to blast astronauts off the Earth and send them towards the Moon.

Under Nasa’s Artemis programme, the next man and the first woman will be despatched to the lunar surface in 2024. It will be the first crewed landing on Earth’s only natural satellite since the Apollo 17 mission in 1972.

Aside from the engineering data it will generate, the current tests will demonstrate the power of the SLS. The engines are the same ones that powered the now-retired space shuttle orbiter and can generate 1.6 million pounds of thrust, which is roughly the same as six 747 airliners at full power.

The SLS core stage is outfitted with three flight computers and special avionics systems that act as the ‘brains’ of the rocket.  It has 18 miles of cabling and more than 500 sensors and systems to help feed fuel and direct the four RS-25 engines.

The stage has two huge propellant tanks that collectively hold 733,000 gallons of super-cooled liquid hydrogen and liquid oxygen. The stage weighs more than 2.3 million pounds when its fully fuelled.

The first mission of the new SLS, Artemis I, is planned for launch in 2021 to complete a flyby of the Moon with no crew.

In 2023, Artemis II will send a crew on a flyby before the Artemis III mission in 2024, in which two astronauts – one woman and one man – will land on the lunar surface.

What effect – if any, at this late stage – the Biden presidency will have on the Artemis programme is unknown. However, in a document by the Democratic Party, Building a Stronger, Fairer Economy, the party states that it supports NASA’s work to return Americans to the Moon and go beyond to Mars, taking the next step in exploring our solar system”.