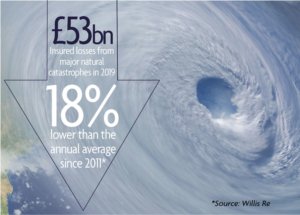 Nat Cat Cost Below Average in 2019

Insured losses from major natural catastrophes in 2019 totalled roughly $53 billion, about 18% lower than the annual average since 2011 according to broker Willis Re.

The firm published its Summary of Natural Catastrophe Events 2019 which found last year continued a relative period of calm compared to 2017, when the total loss reached a peak of $143 billion.

The total loss figure arises from a series of smaller and medium-sized events, with an absence of very large natural catastrophe losses. In contrast, the annual average of $65 billion is driven upwards by peak annual losses of $120 billion in 2011 and $143 billion in 2017, which each brought multiple $10 billion+ events. When the average excludes these peak years, the 2019 total is 14% above the annual average.

Karl Jones, Head of Catastrophe Analytics, Willis Re International, said: “Despite this being a lower than average year compared to the previous decade, we have still seen some extreme and unusual events, including back-to-back typhoon losses in Japan, and the large number and scale of bushfires in Australia.”

The largest insured catastrophe losses in 2019 were in Japan, where tropical cyclones Faxai in September and Hagibis in October delivered insured losses of circa $7 billion and $8 billion respectively. In the US, the largest events were Hurricane Dorian with wide ranging loss estimates and a thunderstorm affecting the High and Central Plains and the eastern US, which brought insured losses of between $3 billion and $4 billion. Elsewhere in the world, no billion-dollar losses occurred. At year-end, the total reported loss cost of Australia’s wildfires, which straddled 2019/20, had reached roughly $900 million. The loss now exceeds USD 1 billion based on current exchange rates, so the 2019 share of the total may reach the billion-dollar threshold as further claims and their dates of loss are reported.

North America had the largest insured catastrophe-loss bill, with around 46% of the global total in 2019, closely followed by Asia Pacific with 38%.

Vaughn Jensen, Executive Vice President and Head of North America Catastrophe Analytics at Willis Re, said: “The year will come as a relative relief to reinsurers, following the extremely costly events of 2017 and 2018. However, the year did bring the strongest-ever landfalling hurricane in the Atlantic, Hurricane Dorian.”

Market Fears Lloyd’s Will Labour Over Transformation
Scroll to top