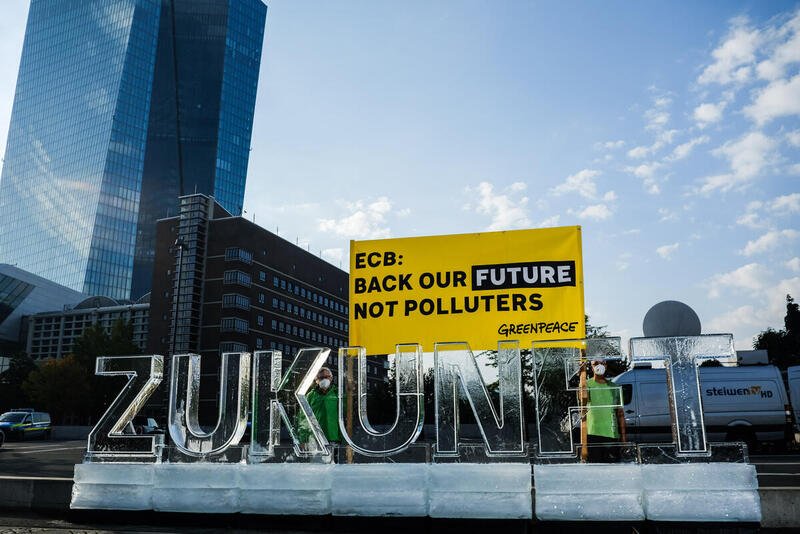 The European Central Bank has been told to beef up its climate ambitions as extreme weather threatens to deliver wide ranging price instability across Europe.

Research has warned that unless the ECB toughens its climate action plan the continent’s economy will suffer as floods, storms and droughts create pricing instability in a range of vital areas including the prices of food, beverages and other essential goods.

The report, “The Price of Hesitation: How the Climate Crisis Threatens Price Stability and What the ECB Must Do About It”, suggests that climate-related disasters have significant impacts on the price of various goods.

Greenpeace warned that despite listing the maintenance of price stability as one of its core missions, the ECB has been reluctant to address the urgency and consequences of the climate crisis in its new monetary policy strategy published on 8 July, which ignores the findings of the International Panel on Climate Change (IPCC) reports.

Alexander Kriwoluzky, professor of Macroeconomics at FU Berlin and head of the Macroeconomic Department at the German Institute for Economic Research warned: “Extreme weather events, such as droughts, have the potential to lead to both an increase or a decrease in prices, for example when the damage from such events brings down demand, inducing in any case price instability. This follows different patterns in different countries of the eurozone and affects the ECB, as the consecutive divergence in prices will make the task of price stabilisation more difficult. Consequently, the ECB should take climate change seriously and needs to respond to it.”

To highlight the new report’s findings, activists from Greenpeace Germany installed an ice sculpture spelling the word “future” in German, at the European Central Bank (ECB) Frankfurt headquarters, where the ECB board met yesterday, to illustrate the consequences of the bank’s slow reaction to the escalating climate crisis.

Dr Mauricio Vargas, Greenpeace Germany financial expert, said: “This report proves there is no economic stability without ecological stability. A vague ‘soon’ is not good enough: the ECB must start tackling the climate crisis immediately. Their new monetary policy strategy does recognise the overall impact of the climate emergency, but the bank has been too slow to adopt measures to deal with it. If it is serious about its climate commitments, the ECB must stop doing business as usual and immediately take preventive measures such as excluding fossil fuel companies from its portfolio.”

In addition to speeding up its new monetary strategy, the report also recommends that the ECB introduce more climate performance criteria into their monetary policy tools; that it aligns the supervision of banks with climate neutrality, and that it abandons market neutrality as the key principle that guides the design of its monetary policy since it favours carbon-intensive companies.

One of the authors of the report, Dr Yannis Dafermos, senior lecturer in Economics and senior fellow at the Centre for Sustainable Finance at SOAS University of London, said: “Although a welcome step, the ECB’s climate action plan fails to provide an ambitious set of measures that are consistent with the climate emergency that we are facing. The ECB roadmap focuses mostly on reducing the exposure of the financial system to climate risks, instead of prioritising the decarbonisation of the euro area financial system. The timeline of the action plan is also inconsistent with the urgency of the climate crisis. In our report, we identify a set of measures that would allow the ECB and the euro area national central banks to step up to one of the most important challenges of our times.”

Ulrich Volz, professor of Economics and Director of the Centre for Sustainable Finance at SOAS University of London, added: “As guardian of macroeconomic and financial stability for the eurozone, the ECB needs to do whatever it takes to support the alignment of the financial system with the EU’s net-zero climate goal. There are many levers that it can use, in full compliance with its mandate. The ECB certainly cannot fix the problem alone, but without a proactive role by the ECB, we are not going to be successful in the net-zero transition of the EU’s economy and financial system.”

Greenpeace delivered a copy of the report to ECB’s President Christine Lagarde calling on the ECB to act quickly and decisively. The ECB new climate strategy must be implemented immediately and consistently and must take into account the scientific recommendations made in the report. While the ECB has not yet worked out the details of its approach, Greenpeace is calling on the bank to already take precautionary measures, like eliminating climate-damaging companies from its operations.

To highlight the new report’s findings, activists from Greenpeace Germany installed an ice sculpture spelling the word “future” in German, at the European Central Bank (ECB) Frankfurt headquarters, where the ECB board met yesterday, to illustrate the consequences of the bank’s slow reaction to the escalating climate crisis.