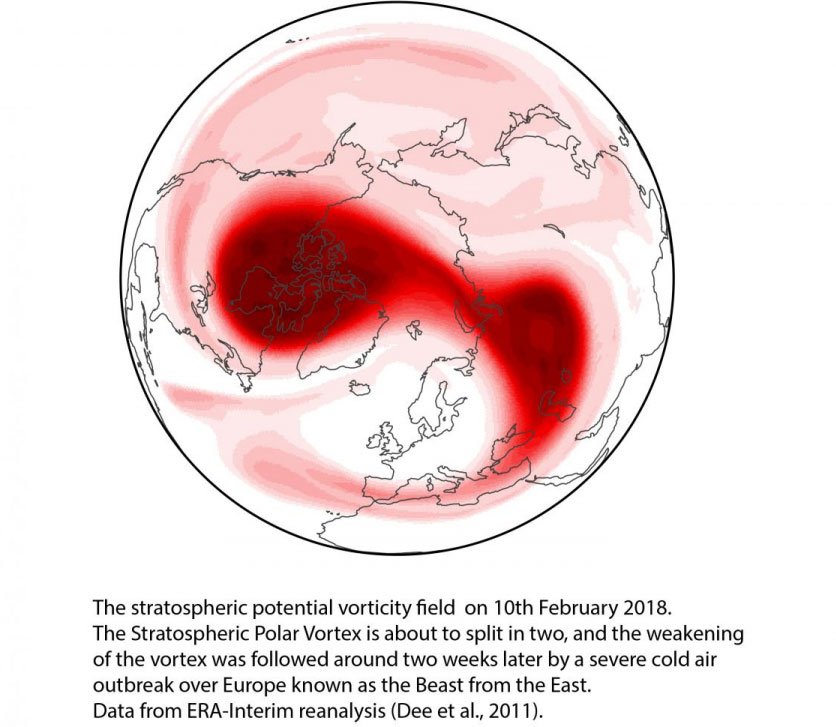 New “Beast From the East” warning after sudden polar warming

Researchers have warned the North West of Europe and Siberia should brace for a major cold snap akin to the Beast from the East which hit the continent in 2018.

The stratosphere is the layer of the atmosphere from around 10-50km above the earth’s surface. SSW events are some of the most extreme of atmospheric phenomena and can see polar stratospheric temperature increase by up to 50°C over the course of a few days. Such events can bring very cold weather, which often result in snowstorms.

The infamous 2018 “Beast from the East” is a stark reminder of what an SSW can bring. The disturbance in the stratosphere can be transmitted downward and if this continues to the earth’s surface, there can be a shift in the jet stream, leading to unusually cold weather across Europe and Northern Asia. It can take a number of weeks for the signal to reach the surface, or the process may only take a few days.

The study, published in the Journal of Geophysical Research and funded by the Natural Environment Research Council (NERC), involved the analysis of 40 observed SSW events which occurred over the last 60 years. Researchers developed a novel method for tracking the signal of an SSW downward from its onset in the stratosphere to the surface.

Findings in the paper, “Tracking the stratosphere-to-surface impact of Sudden Stratospheric Warmings” suggest split events tend to be associated with colder weather over north west Europe and Siberia.

Lead author of the study, Dr Richard Hall, said there was an increased chance of extreme cold, and potentially snow, over the next week or two.:

“While an extreme cold weather event is not a certainty, around two thirds of SSWs have a significant impact on surface weather,” he warned. “What’s more, today’s SSW is potentially the most dangerous kind, where the polar vortex splits into two smaller ‘child’ vortices.”

“The extreme cold weather that these polar vortex breakdowns bring is a stark reminder of how suddenly our weather can flip. Even with climate change warming our planet, these events will still occur, meaning we must be adaptable to an ever more extreme range of temperatures,” said Dann Mitchell, Associate Professor of Atmospheric Science at the University of Bristol and co-author of the study.

“Our study quantifies for the first time the probabilities of when we might expect extreme surface weather following a sudden stratospheric warming (SSW) event,” said Dr William Seviour, senior lecturer at the Department of Mathematics and Global Systems Institute, University of Exeter, and co-author of the study.

“These vary widely, but importantly the impacts appear faster and stronger following events in which the stratospheric polar vortex splits in two, as is predicted in the currently unfolding event. Despite this advance many questions remain as to the mechanisms causing these dramatic events, and how they can influence the surface, and so this is an exciting and important area for future research.”