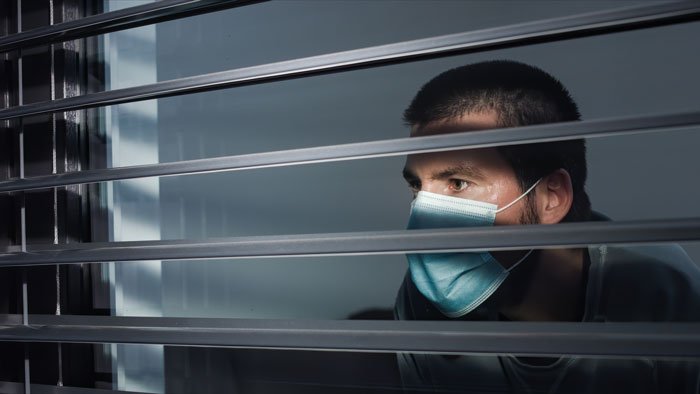 A landmark mental health survey has found while Britons are felling less concerns around the pandemic the past year has increased the feelings of isolation, and suicidal thoughts.

The Mental Health in the Pandemic study showed that one year on, the crisis has had wide and deep emotional impacts on UK adults.

However, the research revealed some positive signs. Anxiety about the pandemic has become less common, falling from 62 per cent of those surveyed in March 2020 to 42 per cent in February 2021.

The overall picture is mixed. Loneliness has become much more common, increasing from 10 per cent of those surveyed in March 2020 to 26 per cent in February 2021. Feelings of loneliness have not returned to their pre-lockdown levels at any point over the past year, including when most restrictions were lifted over the summer.

Loneliness matters for mental health because connections with others help us cope with difficulties. Losing connections means less emotional support, at a time of global crisis that has challenged almost everyone.

The number of people who said they are coping well with the stress of the situation has fallen slowly and fairly steadily over the last year. In April 2020, during the first lockdown, 73 per cent of UK adults said they were coping well and in February 2021, 64 per cent said this.

Dr Antonis Kousoulis, Director for England and Wales at the Mental Health Foundation, explained: “The study has tracked the pandemic’s impacts on our mental health for a year now.

“What we see is a complex picture – on some measures, UK adults are feeling better than in March 2020 but on others, we are feeling no better or worse.

“Fewer of us are feeling anxious about the pandemic but more of us now feel lonely and ground down by the stress of the past year.

“It is absolutely important to remember that the experience of the past year has not been shared by everyone. We have all been in the same storm, but we have not all been in the same boat. The Coronavirus vaccine brings hope. The warmer weather brings smiles. However, for many of us, the next few months – and even years – will remain tough, vulnerable and uncertain.

“We believe this study to be one of the first to have tracked people’s mental health systematically across a pandemic, using nationally representative samples. We hope that it will inform responses to future pandemics, as well as the current one, as it’s not helpful to see Covid-19 as a one-in-a-generation event.”

The study began shortly before the lockdown in March 2020 and has asked questions of the UK public at 10 intervals, generating around 36,000 responses.

It has been carried out in partnership between the Mental Health Foundation and the universities of Cambridge, Swansea, de Montfort Leicester, Strathclyde and Queen’s Belfast.

The Mental Health Foundation is to invest at least £1 million in programmes targeting some of the groups who have been hardest hit by the pandemic – including people of colour, single parents and those with long-term health conditions.

Dr Kousoulis added: “One of our key aims, when we launched the study a year ago, was to identify what was happening across the UK population and whether some groups were particularly seriously affected. This was designed to help us as a charity – and policy-makers – to target support at some of the most vulnerable people.

“We can now clearly see that among the most seriously affected people are young adults, people who are unemployed and full-time students. In these groups, painful experiences including loneliness, hopelessness and feeling suicidal are much more common.

“This is especially troubling, at a time when unemployment is set to rise. Policymakers must target support at these more vulnerable groups, to help prevent them reaching crisis point.

“We also need to see co-ordinated action on mental health from across the whole of Government, with a formal requirement for it to consider the mental health impacts of all policies it develops. This has never been more important than it is now.”

“It is not yet clear whether the pandemic will affect suicide rates,” the study stated. “We do know that suicide is potentially preventable if we take action now. It is also important to remember that most people who have suicidal thoughts and feelings do not go on to attempt or complete suicide. Nevertheless, the study clearly reveals that a considerable portion of the population has been living in hopeless circumstances for a whole year.”

The number of people who said they are coping well with the stress of the situation has fallen slowly and fairly steadily over the last year. In April 2020, during the first lockdown, 73 per cent of UK adults said they were coping well and in February 2021, 64 per cent said this.