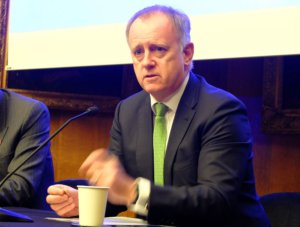 The Decision by Lloyd’s CEO John Neal (pic) to issue a warning to staff across the London market to be on their best behaviour during Christmas party season has not gone down well in some parts.

Mr Neal has sent an email to 45,000 London market staff to urge them to be on their best behaviour at their Christmas parties and in the bars and clubs around the square mile.

The news of the email emerged on the eve of the Lloyd’s Christmas party on Friday and is in the wake of a year where Lloyd’s and the wider London market have been subject to a series of stories of sexual harassment and poor behaviours.

The world’s oldest insurance market has also launched a campaign to get staff to report poor behaviour with posters adorning pubs and bars.

Mr Neal told the media that this was a “particularly challenging time of year” and said Lloyd’s had reminded its members of expected behaviour.

However Mr Neal’s intervention has not been universally welcomed.

Some staff have said the email had cast a cloud over company celebrations and their long awaited events would be less of a party atmosphere and more of a case of being judged by bosses who would spend their time seeking out alleged misbehaviour.

“There are a lot of people I have spoken to in the office who say they really do not want to attend the party,” said one Lloyd’s broker. “Some say that the Christmas party will end up being held under an atmosphere of fear rather than a relaxed celebration of another year of hard work.”

They added: “If John Neal wanted to warn Lloyd’s staff then so be it. Our management are more than capable of ensuring that our culture and behaviour policies are understood and enforced. It has just put a real dampener on Christmas.”