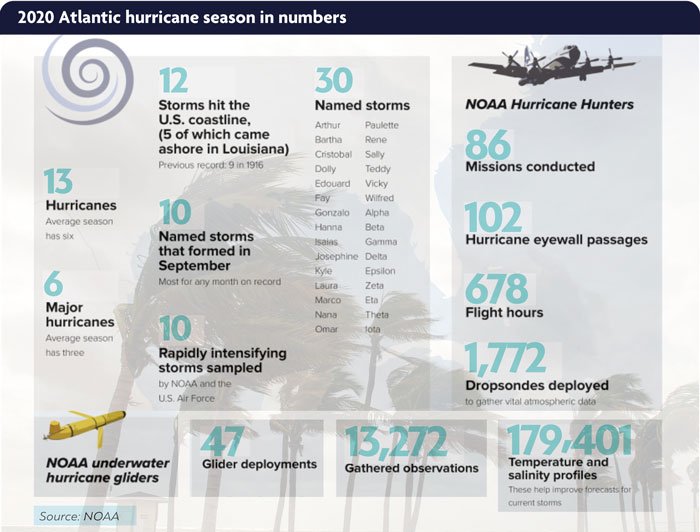 The World Meteorological Organisation (WMO) is to look at changes to the naming of hurricanes following what it described as the perfect storm of the 2020 North Atlantic hurricane season.

The organisation’s Hurricane Committee will hold its annual session against the backdrop of a 2020 Atlantic hurricane season which had a record-breaking 30 named tropical storms, including 13 hurricanes and six major hurricanes, with direct impacts in many countries in the Atlantic basin, Caribbean Sea and Gulf of Mexico.

There were five landfalling hurricanes in the Caribbean including two at category 4 strength that occurred in Nicaragua about two weeks apart.  There were also 12 landfalling storms in the continental United States.

It was the sixth straight season with above average activity, and it caused hundreds of casualties and billions of dollars’ worth of damage.

“The 2020 hurricane season was one of the most challenging in the 40-year history of WMO’s Tropical Cyclone Programme,” says WMO Secretary-General Prof. Petteri Taalas. “The record number of hurricanes combined with COVID-19 to create, literally, the perfect storm.”

“For the second consecutive year, restrictions to stop the spread of the pandemic look set to complicate hurricane preparedness and response. Coping capacities, especially in storm-ravaged areas, have worn thin. More than ever before, accurate and timely warnings are vital to minimize death and disruption and to maximize public safety and well-being,” said Prof. Taalas.

Operational plan
The Hurricane Committee, which serves North America, Central America and the Caribbean will examine its operational plan for the forthcoming season at its virtual session from 15 to 17 March. This includes the provision of forecasts and warnings, as well as impact assessments, for wind, storm surge and flooding hazards, and the naming convention.

The US National Hurricane Centre acts as WMO’s Regional Specialised Meteorological Centre (RSMC) for tropical cyclone forecasting, under a successful international cooperation model which ensures that sophisticated forecast, training and impact assessment products reach countries and communities which are most vulnerable to tropical cyclone-related hazards.

“Despite the severe impacts and fatalities that occurred in 2020, there is no question that hundreds and perhaps thousands of lives were saved thanks to preparedness,” says Kenneth Graham, NHC Director and Hurricane Committee Chair. “Timely and targeted warnings ensured a successful balance between the need to evacuate and the need to stay put in the midst of the pandemic.”

“The U.S. Air Force and NOAA Hurricane Hunters are commended for these efforts in providing extremely valuable meteorological data not available from any other sources. These data helped to determine the intensity, location and structure of tropical storms and hurricanes that threatened or impacted land. This assisted with the timely issuance of impact-based forecast information and warnings from the RSMC and National Meteorological Services throughout the region,” said Mr Graham.

The 2020 season got off to an early and rapid start with a record nine named storms from May through July. It ended late, with two major hurricanes in November for the first time on record and at a time when the season is normally winding down. The season was so active that WMO’s 21-name rotating list was exhausted and the Greek alphabet was used for only the second time (the first time was in 2005).

Category 4 hurricane
In late August, Laura made landfall in Louisiana as a Category 4 hurricane, Laura caused at least $19 billion in damage and 77 deaths. September was the most active month on record in the Atlantic, with ten named storms. Slow-moving Hurricane Sally impacted the US Gulf Coast, causing severe flooding.

Hurricanes Eta and Iota made landfall as Category 4 in Nicaragua just two weeks apart in November, killing hundreds of people and impacting the entire region.

“Developing countries and small islands in the Caribbean and Central America are increasingly vulnerable to the impacts of tropical cyclones, which can overturn years of socio-economic development in a matter of hours. In 2020, we saw this once again with tragic effect,” said Evan Thompson, President of WMO’s Regional Association for North America, Central America and the Caribbean.

“We cannot prevent this incredible force of nature, but we do have the power to minimize the loss of life and property through cutting-edge forecasts and warnings and strong regional coordination and cooperation,” said Mr Thompson, who head’s Jamaica’s national meteorological service.

The committee is also to consider its naming convention.

Atlantic tropical cyclone name lists repeat every six years unless a storm is so deadly or costly that its name is retired from future lists. The Hurricane Committee will discuss the retirement of names from 2020 and also 2019 because this was not on the agenda of last year’s Hurricane Committee due to the unfolding COVID-19 crisis. It will also discuss the use of the Greek alphabet.

The Hurricane season officially begins on 1 June and lasts until 30 November.

Named storms have formed prior to the official start of the hurricane season in about half of the past 10-15 years, including each of the past six years. Many of the May systems are short-lived, hybrid (subtropical) systems that are now being identified because of better monitoring and policy changes that now name subtropical storms.

“The 2020 hurricane season was one of the most challenging in the 40-year history of WMO’s Tropical Cyclone Programme, the record number of hurricanes combined with COVID-19 to create, literally, the perfect storm.”