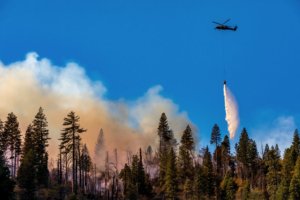 Companies and individuals impacted by California wildfires since 2015 are set to get compensation after a new settlement agreement was agreed.

PG&E Corporation and Pacific Gas and Electric Company (PG&E) have agreed to a settlement with the Official Committee of Tort Claimants (TCC) and with firms representing individual claimants who sustained losses from the 2017 Northern California Wildfires and 2018 Camp Fire. The settlement agreement is valued at approximately $13.5 billion and has the support of the TCC. The settlement will resolve all claims arising from those fires, including the 2017 Tubbs Fire, as well as all claims arising from the 2015 Butte Fire and 2016 Ghost Ship Fire in Oakland.

The settlement is subject to a number of conditions and is to be implemented pursuant to PG&E’s Chapter 11 Plan of Reorganisation which is subject to confirmation by the Bankruptcy Court.

The firm said Bankruptcy Court approval of the settlement agreement would put PG&E on a sustainable path forward to emerge from Chapter 11 by the June 30, 2020, deadline to participate in the State of California’s go-forward wildfire fund.

“From the beginning of the Chapter 11 process, getting wildfire victims fairly compensated, especially the individuals, has been our primary goal. We want to help our customers, our neighbours and our friends in those impacted areas recover and rebuild after these tragic wildfires,” said CEO and President of PG&E Corporation Bill Johnson.

“We appreciate all the hard work by many stakeholders that went into reaching this agreement. With this important milestone now accomplished, we are focused on emerging from Chapter 11 as the utility of the future that our customers and communities expect and deserve.”

“There have been many calls for PG&E to change in recent years. PG&E’s leadership team has heard those calls for change, and we realize we need to do even more to be a different company now and in the future. We will continue to make the needed changes to re-earn the trust and respect of our customers, our stakeholders and the public. We recognize we need to deliver safe and reliable energy service every single day—we’re determined to do just that.”

“Finally, we share the state’s focus on helping mitigate the risk of future wildfires and we will continue to do everything we can to help reduce those risks across our system,” concluded Johnson.

This new agreement is the third major settlement that PG&E has achieved in its Chapter 11 case. PG&E previously reached settlements with two other major groups of wildfire claim holders including a $1 billion settlement with cities, counties and other public entities, and an $11 billion agreement with insurance companies and other entities that have already paid insurance coverage for claims relating to the 2017 and 2018 wildfires.