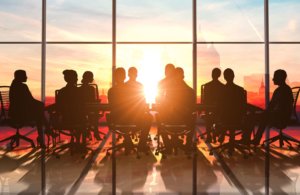 New Research has found UK business leaders are struggling to cope with the pressures of a rapidly changing world.

Increased competition, political uncertainty and facing greater scrutiny are all making it much tougher at the top – according to new research.

A study of 1,000 workplaces published in Thinking On Your Feet, a report by the commercial arm of the Royal Academy of Dramatic Art, RADA Business, has found that 81% of senior leaders said they were often placed in situations where they found it difficult to remain calm.

Increased competition, political uncertainty and facing greater scrutiny are all making it much tougher at the top – according to the report, and the pressure is only increasing.

Rachel Griffiths, Client Director at RADA Business, said: “In any given moment, on any given stage, it is the role of a leader to create and sustain a genuine connection with their audience. It is this powerful leadership performance, rather than an outstanding PowerPoint presentation, that encourages people to follow you and make positive change.

Maintaining leadership performance through times of uncertainty demands a greater need to remain present, to align your physical, emotional and intellectual state. This is particularly challenging in the moment when you find yourself needing to think on your feet.

Under pressure, leaders tend to focus on the content of what they’re saying, losing their personal connection with others, as well as an awareness of how they’re coming across. In the eyes of their audience, they can lose credibility by speeding up their breathing and appearing tense, with no vocal presence – showing a lack of confidence.

Actors practice improvisation to develop their ability to give their strongest performance in the moment. When leaders become proficient in the same practice, they become able to manage their state, remain connected and develop a deeper level of resilience and self-reliance in their leadership.’’

More than a third (37%) of senior managers, directors and C-Suite said that high-pressure scenarios made it harder to prepare and express their thoughts.

When asked what situations affected their ability to relax and act authentically, 31% of business leaders admitted that board meetings with very senior people was a leading factor. Video conference calls (30%) was found to be one of the second biggest causes of nervousness faced in the workplace, followed by training sessions (30%).

Small group meetings (27%) was also a big issue hindering leaders’ abilities to think clearly and act authentically, with telephone conference calls appearing next on the list (27%).

The study also reveals that leaders struggle to exhibit an air of calm when they feel under pressure, with not maintaining eye contact (30%) slouching (25%), and physically shaking (21%) being identified as the most common physical side effects.

As a result, many leaders seek extra training and guidance on how to successfully adapt to change and proactively alter their management style to respond to changing scenarios.

US Retailers Fighting Back against Organised Crime
Scroll to top