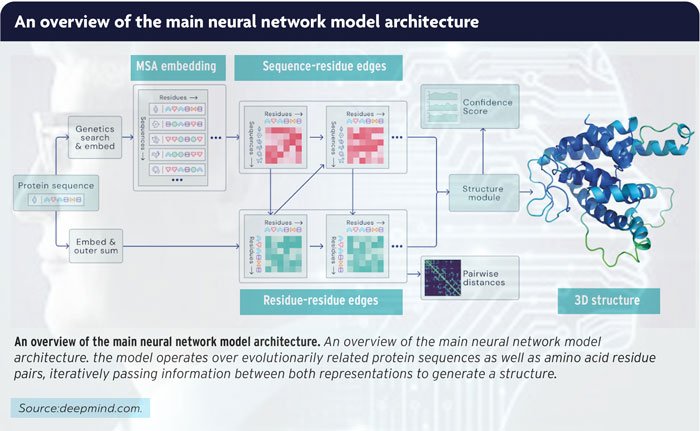 Proteins are essential to life, supporting practically all its functions. They are large complex molecules, made up of chains of amino acids, and what a protein does largely depends on its unique 3D structure.  Figuring out what shapes proteins fold into is known as the “protein folding problem” and has stood as a grand challenge in biology for the past 50 years.

Now, in a major scientific advance, the latest version of an AI system developed by UK based artificial intelligence company and research laboratory DeepMind, AlphaFold, has been recognised as a solution to this grand challenge by the organisers of the biennial Community Wide Experiment on the Critical Assessment of Techniques for Protein Structure Prediction (CASP) .

This breakthrough demonstrates the impact AI can have on scientific discovery and its potential to dramatically accelerate progress in some of the most fundamental fields that explain and shape our world.

The importance of proteins

A protein’s shape is closely linked with its function, and the ability to predict this structure unlocks a greater understanding of what it does and how it works. Many of the world’s greatest challenges, like developing treatments for diseases or finding enzymes that break down industrial waste, are fundamentally tied to proteins and the role they play.

This has been a focus of intensive scientific research for many years, using a variety of experimental techniques to examine and determine protein structures, such as nuclear magnetic resonance and X-ray crystallography. These techniques, as well as newer methods like cryo-electron microscopy, depend on extensive trial and error, which can take years of painstaking and laborious work per structure, and require the use of multi-million dollar specialised equipment.

In 1972, Christian Anfinsen was awarded a Nobel Prize for his work showing that it should be possible to determine the shape of proteins based on the sequence of their amino acid building blocks.

Every two years, scores of teams from more than 20 countries blindly attempt to predict using computers the shape of a set of around 100 proteins from amino acid sequences alone.

At the same time, the 3-D structures are worked out in the lab by biologists using traditional techniques like X-ray crystallography and NMR spectroscopy, which determine the location of each atom relative to each other in the protein molecule.

A team of scientists from CASP then compares these predictions with 3-D structures solved using experimental methods.

CASP uses a metric known as the global distance test to assess accuracy, ranging from 0-100. A score of around 90, which DeepMind’s AlphaFold program achieved, is regarded as comparable with lab techniques.

In the latest round of the challenge, Casp-14, AlphaFold determined the shape of around two thirds of the proteins with accuracy comparable to laboratory experiments.

The assessors said accuracy with most of the other proteins was also high, though not quite at that level.

“This computational work represents a stunning advance on the protein-folding problem, a 50-year-old grand challenge in biology. It has occurred decades before many people in the field would have predicted. It will be exciting to see the many ways in which it will fundamentally change biological research.” Professor Venki Ramakrishnan, nobel laureate and president of the Royal Society

The potential for real-world impact

DeepMind said it is optimistic about the impact AlphaFold can have on biological research and the wider world, and excited to collaborate with others to learn more about its potential in the years ahead. Alongside working on a peer-reviewed paper, it is exploring how best to provide broader access to the system in a scalable way.

In the meantime, it is also looking into how protein structure predictions could contribute to our understanding of specific diseases with a small number of specialist groups, for example by helping to identify proteins that have malfunctioned and to reason about how they interact.

The DeepMind team has also seen signs that protein structure prediction could be useful in future pandemic response efforts, as one of many tools developed by the scientific community.

As well as accelerating understanding of known diseases, the DeepMind team says it is excited about the potential for these techniques to explore the hundreds of millions of proteins we don’t currently have models for – a vast terrain of unknown biology. Among the undetermined proteins may be some with new and exciting functions and – just as a telescope helps us see deeper into the unknown universe – techniques like AlphaFold may help us find them.

AlphaFold is one of the most significant advances to date but, as with all scientific research, there are still many questions to answer. Not every structure we predict will be perfect. There’s still much to learn, including how multiple proteins form complexes, how they interact with DNA, RNA or small molecules  and how we can determine the precise location of all amino acid side chains. In collaboration with others, there’s also much to learn about how best to use these scientific discoveries in the development of new medicines, ways to manage the environment, and more.

According to DeepMind: “For all those working on computational and machine learning methods in science, systems like AlphaFold demonstrate the stunning potential for AI as a tool to aid fundamental discovery. Just as 50 years ago Anfinsen laid out a challenge far beyond science’s reach at the time, there are many aspects of our universe that remain unknown. The progress announced today gives us further confidence that AI will become one of humanity’s most useful tools in expanding the frontiers of scientific knowledge, and we’re looking forward to the many years of hard work and discovery ahead!” 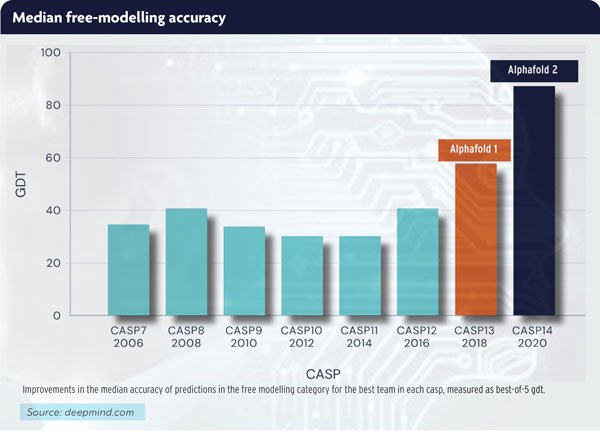