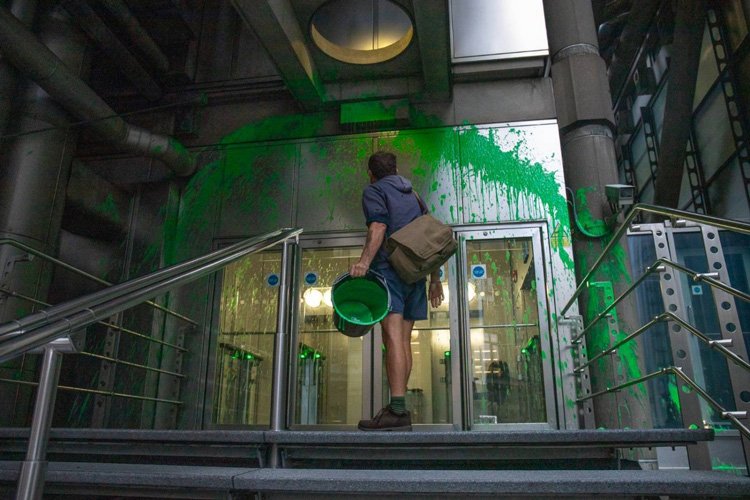 Protestor arrested after attack on Lloyd’s

Police have arrested a climate protestor after they threw paint on the Lloyd’s building.

The activist from Insurance Rebellion was detained after throwing a bucket of green paint over the front of the building. Insurance Rebellion say they carried out this escalation in their campaign to “highlight the shameless greenwashing being carried out by Lloyd’s of London, who continue to insure fossil fuel projects across the world.”

The protestor who threw the biodegradable water based paint then sat down and waited for police to arrive and arrest him. An accompanying banner read, “Stop Insuring Fossil Fuels now”.

Insurance Rebellion added one example highlighted by protestors was the insurance marketplace’s Instagram profile, which shows just one thing: a huge solar power array. The group argued that this and other publicity campaigns such as a new ‘taskforce for tackling the climate crisis’ is entirely unrepresentative of their business as they are not showing or talking about all the heavily polluting projects they are also insuring.

A member of Insurance Rebellion at the Lloyd’s building, Zoe, a 28-year-old teacher, added: “Why did we cover their headquarters in green? We’re sick and tired of Lloyd’s of London’s obvious and persistent greenwashing.

“They recently teamed up with Prince Charles to very publicly launch a so-called taskforce for tackling the climate crisis, but they still happily insure any oil or gas project that pays them a high enough premium. They have a coal exclusion policy, but this doesn’t start until next year, and they’re allowing coal insurance renewals for another ten years. Nothing they do or say can be taken at face value – they’re just trying to convince the public that they’re taking the climate crisis seriously. We’re here to point out Lloyd’s is lying when they tell us they’re green.”

Andy Paine, spokesperson for Frontline Action on Coal in Australia said: “This week we saw London flooding right on Lloyd’s doorstep. In Australia, we’re facing deadly forest fires and flooding. The insurance industry’s response is to stop insuring normal people’s homes due to increasing risks driven by climate change. What they need to do is stop insuring the fossil fuel projects like the Adani coal mine, which will open up one of the world’s the largest coal reserves and wreck the climate. Anything else is just greenwash.”

When asked what they plan to do next, Insurance Rebellion said: “We will continue to target the heart of ethical corruption in insurance – Lloyd’s of London – but will also start to focus on its worst members, too, for example Tokio Marine, who are one of the biggest insurers of coal globally. Also, the extremely polluting Trans Mountain Pipeline is currently attempting to find insurers who care little enough about its impact on the climate and people to insure it – we’ll be paying close attention to any insurance company stupid and selfish enough to partner with it.”