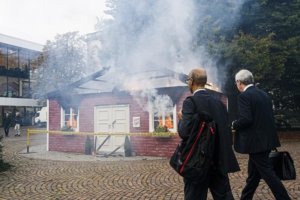 Greenpeace activists have hit the annual reinsurance meeting at Baden Baden using a burning building to highlight the need for action over the re/insurance coverage of fossil fuel companies.

The move comes as Greenpeace seek to put further pressure on reinsurers not to cover new and existing coal projects.

Delegates arriving at the conference centre for their renewal discussions were confronted with 15 demonstrators and a burned down house which appeared to still be on fire.

The environmental activists said the house was there to symbolise “how the planet – our collective home – is on fire due to fossil fuels”.

“The aim is to ask participants to either help put out the fire or if they wish, add more fuel to fire, which is symbolic of their role in the climate emergency where many provide insurance coverage to insurance companies that are linked to coal,” added Greenpeace.

“Greenpeace Germany is here today calling on reinsurers to not renew any contracts linked to coal. Over half of reinsurance companies still provide coverage for single coal-fired power plants or coal mines and continue to have clients that insure power suppliers generating significant proportions of their electricity from coal,” said Adam Pawloff, Climate and Energy Campaigner, Greenpeace Central- and Eastern Europe.

He added that coal dominates the power sector, generating 40-41% of the world’s energy according to figures from Carbon Brief and, based on IEA figures, contributing 44% of energy related carbon emissions.

“A coal project cannot exist without insurance and insurance companies need reinsurance to spread the financial risk,” said Greenpeace. “This meeting is where the renewal of reinsurance contracts, including those related to coal, are discussed.”

According to Unfriend Coal, by mid-2018 seven reinsurance companies controlling 45% of global reinsurance premiums had reportedly divested some or all of their assets from coal. But the criteria for what these major carriers will or will not insure not only differ from each other, but also allow for the continued underwriting of certain coal risks, including in many cases new-build coal power plants and mines.

“A wise reinsurer would be moving away from insurance companies that are offering or providing coverage to coal projects – new and established – due to the economic and ecological risks attached. There is no insurance on a burnt planet,” said Mr Pawloff.Greenpeace also issued a demand that reinsurance companies commit to developing or updating climate strategies that include a commitment not to support – through underwriting or investment – the further expansion of fossil fuels.

“Additionally, in line with the findings of the IPCC special report on 1.5°C, any company not phasing out coal by 2030 in OECD countries and 2040 globally, must be excluded from further activities of any kind – this includes not renewing contracts, when these come to an end,” it added. 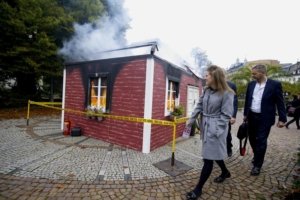