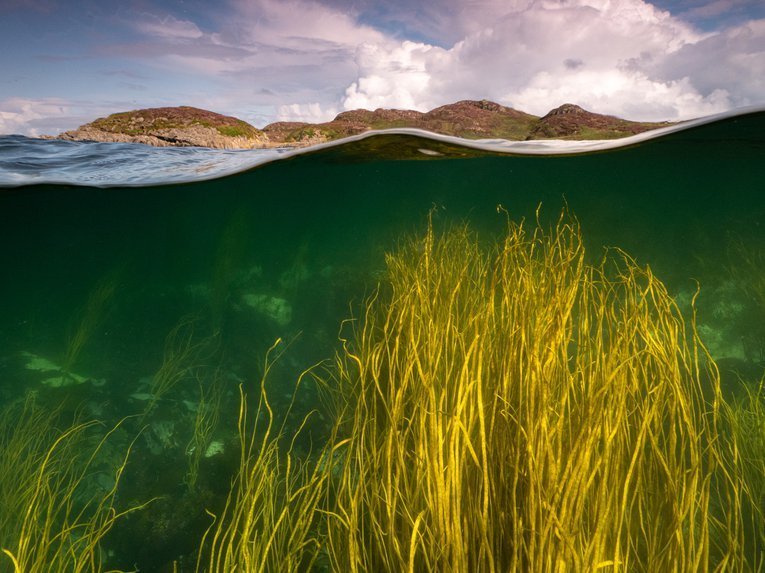 Rewilding oceans call as report spells out the carbon benefits

Conservationists have urged the world to look to the world’s oceans to drive the ability to deliver a net zero future.

The Marine Conservation Society and Rewilding Britain have published a new report, “Blue Carbon – Ocean-based solutions to fight the climate crisis” which calls on global governments to invest as much in rewilding the ocean as they are in rewilding the world’s landmass.

The report outlines the importance of our seas in helping the UK to reach net zero by 2050.

“To ‘reach net zero’ the amount of greenhouse gases produced, and the amount taken away or absorbed, must come to zero,” added the report. “So, while we can all try to fly less, walk more and take individual actions to reduce our carbon footprint, we also need to push for more solutions to removing greenhouse gases.”

It said by protecting and rewilding habitats in our ocean, blue carbon stores will have increased capacity and ability to store carbon.

The significant role of the world’s forests in helping to reduce carbon emissions has been recognised resulting in initiatives and reforesting projects intended to keep carbon locked in land. Unfortunately, equivalent solutions in the ocean are often overlooked, the report warned.

“We need to look to blue carbon solutions in tandem with those on land to reach our goals of tackling the climate crisis.”

“Carbon contained in marine and coastal habitats must be considered in the same way as woodlands and peatbogs…critical to the UK’s carbon strategy,” said Dr Chris Tuckett, Director of Programmes for the Marine Conservation Society. “Our report outlines how vital blue carbon solutions are to an effective strategy which reaches net zero by 2050. We’re calling on the UK Government and devolved administrations to act with urgency to invest in, co-develop and implement a four nation Blue Carbon Strategy.”

Globally, rewilding key blue carbon stores such as seagrass beds, saltmarshes and mangroves could deliver carbon dioxide mitigation amounting to 1.83 billion tonnes. “That’s 5% of the emissions savings we need to make globally,” said the report.  “This figure doesn’t include the enormous quantities of carbon stored in fish and other marine life;  coral reefs, seaweeds and shellfish beds; or the vast stores of carbon in our seabed sediments.”

“We’re calling for the rewilding and protection of at least 30% of Britain’s seas by 2030.” Explained Rebecca Wrigley, Rewilding Britain’s Chief Executive. “Allowing a rich rainbow of underwater habitats and their sealife to recover offers huge opportunities for tackling the nature and climate crises, and for benefiting people’s livelihoods.

“From Dornoch Firth to Lyme Bay, inspiring projects are leading the way by restoring critically important seagrass meadows, kelp forests and oyster beds. Combined with the exclusion of bottom towed trawling and dredging, such initiatives offer hope and a blueprint for bringing our precious seas back to health.”

The UK has committed to significantly increase its spending on nature-based solutions, including those offered by the ocean.  The Marine Conservation Society and Rewilding Britain said the report is a call on the UK government to adopt ocean-based solutions “at pace and scale” by 2030.