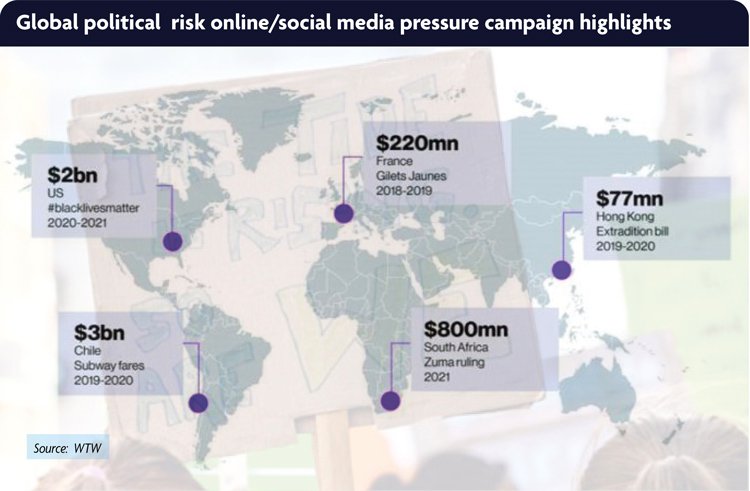 A new study into the threat of political risk has found the growing influence of social media in enhancing political instability across the world.

Broker Willis Towers Watson has published its latest Political Risk Index which monitors patterns of political instability in the world’s most vulnerable countries.

In the latest edition, the Index assesses the impact of new technologies, particularly social media, on emerging market politics.

The report highlighted how social media has made activist politics more effective as well as empowering social groups that may have traditionally avoided political activism because of social discrimination or geographical dispersion.

“There is an important myth to dispel, that China doesn’t have politics,” said Rana Mitter, professor of Chinese politics at the University of Oxford, speaking at an online event to launch the index. “In fact, social media is the major interaction point for popular opinion in China, and hundreds of thousands or even millions of people will participate in conversations on controversial social issues.”

“Since the 2011 Arab Spring uprising specifically, social media have come to play a very important political role across developing and developed economies,” said Dr Megha Kumar, deputy director of Analysis at Oxford Analytica. “That role ranges from at one extreme, efforts to incite political violence, to the use for which they were intended, namely communication.”

The report found that “flash mob” protests, organised in part using mobile devices, have played a role in the toppling of governments in the Philippines in 2001; Georgia in 2003; Ukraine in 2004-5; Kyrgyzstan in 2005; and Thailand in 2006, along with more recent examples including the 2019 ouster of Algeria’s long-serving President Abdelaziz Bouteflika.

The report also found that online pressure campaigns had in 2021 contributed to government policy shifts in countries ranging from Nepal and Bangladesh to Israel and Nigeria.

Samuel Wilkin, director of Political Risk Analytics, Financial Solutions, Willis Towers Watson, said that the insurance industry had been caught off guard by some political impacts of new communication technologies: “Hashtag-enabled protest movements have evolved with extraordinary speed and scale, leading to property damage at a level that we don’t usually associate with social unrest.”

Singapore to mandate climate and diversity disclosures
Scroll to top