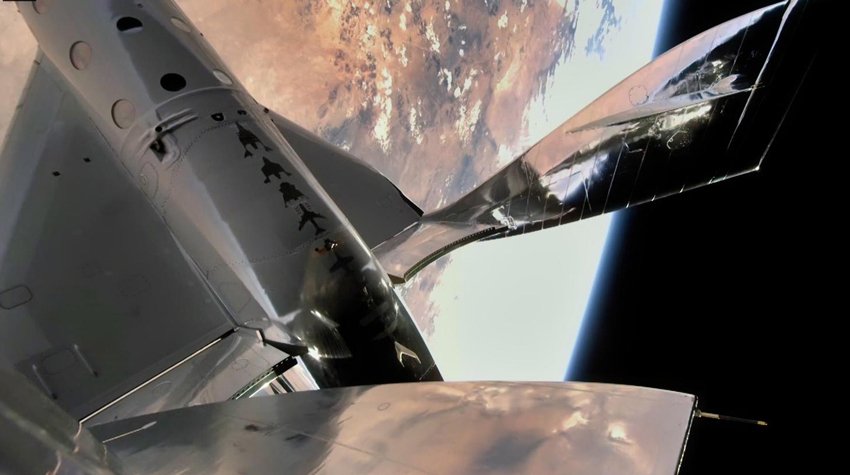 Virgin Galactic announced it had completed its third spaceflight and the first ever spaceflight from Spaceport America, New Mexico, as the world’s space agencies were warned that manned space flights may well be unable to take place until the end of the decade.

Virgin’s VSS Unity achieved a speed of Mach 3 after being released from the mothership, VMS Eve, and reached space, at an altitude of 55.45 miles before gliding smoothly to a runway landing at Spaceport America this weekend.

Michael Colglazier, Chief Executive Officer of Virgin Galactic, said: “Today’s flight showcased the inherent elegance and safety of our spaceflight system, while marking a major step forward for both Virgin Galactic and human spaceflight in New Mexico. Space travel is a bold and adventurous endeavour, and I am incredibly proud of our talented team for making the dream of private space travel a reality. We will immediately begin processing the data gained from this successful test flight, and we look forward to sharing news on our next planned milestone.”

Virgin Galactic fulfilled a number of test objectives during the flight, including collecting the data to be used for the final two verification reports that are required as part of the current FAA commercial reusable spacecraft operator’s license.

“Fifteen years ago, New Mexico embarked on a journey to create the world’s first commercial spaceport,’’ said Sir Richard Branson. ‘’Today, we launched the first human spaceflight from that very same place, marking an important milestone for both Virgin Galactic and New Mexico. I am proud of the team for their hard work and grateful to the people of New Mexico who have been unwavering in their commitment for commercial spaceflight from day one. Their belief and support have made today’s historic achievement possible.”

However Virgin’s delighted may well be tempered by research from the University of Reading.

The research warned planned missions to return humans to the Moon need to hurry up to avoid hitting one of the busiest periods for extreme space weather.

Scientists at the university studied 150 years of space weather data to investigate patterns in the timing of the most extreme events, which can be extremely dangerous to astronauts and satellites, and even disrupt power grids if they arrive at Earth.

The researchers found for the first time that extreme space weather events are more likely to occur early in even-numbered solar cycles, and late in odd-numbered cycles – such as the one just starting. They are also more likely during busy periods of solar activity and in bigger cycles, mirroring the pattern for moderate space weather.

The findings, may have implications for the NASA-led Artemis mission, which plans to return humans to the moon in 2024, but which could be delayed to the late 2020s.

Professor Mathew Owens, a space physicist at the University of Reading, said: “Until now, the most extreme space-weather events were thought to be random in their timing and thus little could be done to plan around them.

“However, this research suggests they are more predictable, generally following the same ‘seasons’ of activity as smaller space-weather events. But they also show some important differences during the most active season, which could help us avoid damaging space-weather effects.

“These new findings should allow us to make better space weather forecasts for the solar cycle that is just beginning and will run for the decade or so. It suggests any significant space missions in the years ahead – including returning astronauts to the Moon and later, onto Mars – will be less likely to encounter extreme space-weather events over the first half of the solar cycle than the second.”

Previous research has generally focused on how big extreme space weather events can be, based on observations of previous events. Predicting their timing is far more difficult because extreme events are rare, so there is relatively little historic data in which to identify patterns.

In the new study, the scientists used a new method applying statistical modelling to storm timing for the first time. They looked at data from the past 150 years – the longest period of data available for this type of research – recorded by ground-based instruments that measure magnetic fields in the Earth’s atmosphere, located in the UK and Australia.