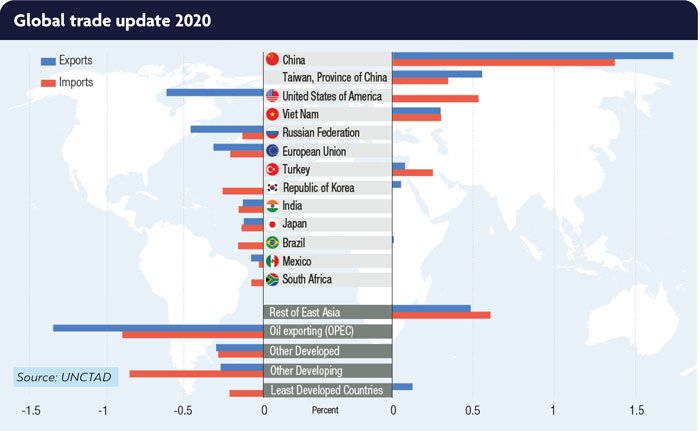 Continued uncertainty around the timing and magnitude of stimulus packages has prompted fears that the global trade rebound will falter in the coming months.

The United Nations Conference on Trade and Development (UNCTAD) issued its Global Trade Update which reported global trade recovered in the last quarter of 2020, reducing its overall decline for the year to about 9%, led by an increase in goods trade.

But while imports and exports of goods grew by about 8% in the fourth quarter of last year, trade in services stagnated as measures taken in the global fight against COVID-19 continued to affect sectors such as travel. The concern is that globally, services represent two-thirds of economic output and more than half of the world’s jobs.

“The recovery process has been uneven, with many countries lagging,” said UNCTAD economist Alessandro Nicita, who worked on the report.

UNCTAD warned although the last quarter of 2020 showed signs of improvement there were concerns around the prospects for the coming year as COVID continued to impact lives and economies across the world.

The report also found that COVID-19 has affected countries’ competitiveness in global markets, with some economies gaining market share in certain sectors while losing it in others.

UNCTAD said the recovery of Q4 2020 was largely driven by the trade of goods from and to developing countries, especially by the very strong performance of East Asian economies.

On a year-over-year basis, trade in goods originating from East Asia grew about 12% in Q4 2020, with goods imports increasing by about 5%, according to the report.

In contrast, negative trends remained for goods exports originating from most other regions, even in Q4 2020.

The influence of East Asian economies is even more marked when considering trade among developing countries (South-South trade) the organisation added.

“The recovery in Q4 2020 was more broad-based, as trade in most sectors recorded positive growth,” Mr. Nicita said.

In Q3 2020, the recovery was, by contrast, largely driven by sectors related to goods for which demand increased due to COVID-19, such as personal protective equipment and home office equipment.

However, besides services, trade in the energy and transport equipment sectors continued to be well below average levels.

UNCTAD said the recovery of Q4 2020 was largely driven by the trade of goods from and to developing countries, especially by the very strong performance of East Asian economies.