Hurricane Elsa weakened as it approached landfall in Florida early Wednesday morning (7 July), according to the latest advisory from the US National Hurricane Center (NHC), but storm surge warnings are in place.

Elsa had gathered strength to a Category-1 hurricane as it approached landfall near Tampa but then weakened again.

While the storm weakened, hurricane warnings remain in place for more than four million people.

Across three states, more than 12 million people are under a tropical storm warning.

The storm was southwest of Tampa early Wednesday morning, where residents were urged to stay indoors.

As the storm moves the western coast of Florida with maximum sustained winds of 70 mph, it is expected to be near the Pinellas Peninsula around 2am EST – the closest it will be to land before it makes landfall later in the morning.

The system is moving north at 14 mph on a collision course with Cedar Key in the Big Bend area, where it is expected to make landfall late Wednesday morning.

Storm surge is a serious concern. The combination of a storm surge and the tide will cause normally dry areas near the coast to be flooded by rising waters moving inland from the shoreline.

The Florida National Guard has activated 60 guardsmen to serve at the State Emergency Operations Center and Logistics Readiness Center, according to a release from the Guard. It is prepared to activate additional personnel as needed.

On Tuesday, Georgia Governor Brian Kemp issued a State of Emergency in preparation for the impact of Elsa.

“This storm system has the potential to produce destructive impacts to citizens throughout the central, southern, and coastal regions of the State of Georgia and due to the possibility of downed trees, power lines, and debris, Georgia’s network of roads may be rendered impassable in the affected counties, isolating residences and persons from access to essential public services,” Kemp said. 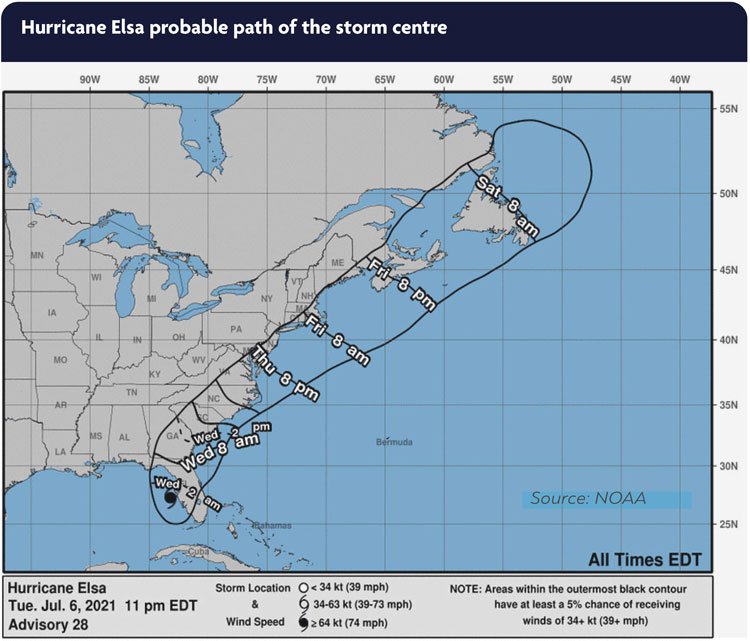