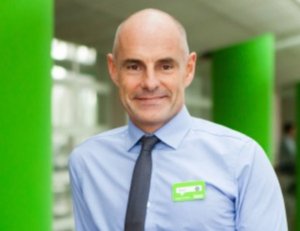 Asda, Walmart and the Trustee of the Asda Group Pension Scheme have announced an agreement for a bulk annuity insurance ‘buy-in’ of the Scheme with Rothesay Life, a specialist insurer of defined benefit pension schemes.

The supermarket chain said: “The agreement secures the benefits of members – providing certainty and security for all of the Scheme’s approximately 12,300 members (4,800 pensioners and 7,500 deferred pensioners). The Scheme is separate to the Asda Pension Plan, a defined contribution scheme, which provides ongoing pension arrangements to the majority of Asda’s colleagues.”

Roger Burnley, (pic) Chief Executive of ASDA, said: “This transaction is an excellent outcome for our Scheme members – and for Asda and Walmart. We have supported the Scheme over many decades through significant cash contributions. That funding, combined with strong stewardship by the Scheme’s trustees, has resulted in the very positive situation where the Scheme can now be transferred to an A+ rated insurance company, Rothesay Life – de-risking the scheme and providing long term, sustainable support for its members.”

The Scheme’s £3.8 billion buy-in has been secured in anticipation of a full ‘buy-out’ of the Scheme and will be enabled by a one-off final pension contribution from Asda of approximately £0.8 billion.

Under the terms of the buy-in, members of the Scheme will be provided with individual annuity policies issued by Rothesay Life, who will then be responsible for paying members’ benefits in full. These individual policies will replace the bulk annuity policy and bring about a full scheme buy-out, expected to be completed in late 2020 or early 2021.

At the time of the completion of the buy-out Walmart will recognise a pre-tax charge to earnings of approximately $2.2 billion, of which $1.2 billion relates to non-cash items.

“The transaction will remove all future Scheme liabilities from the Asda and Walmart balance sheets, simplifying the business at a cost which is significantly below the expected future cost of funding internally,” said Asada in a statement. “The Parties have made the decision to take this step now having agreed jointly that market conditions are favourable and because pension liabilities can be more effectively managed by a large insurer, such as Rothesay Life, given their scale and expertise in this area.”

Tom Pearce, Managing Director at Rothesay Life, said: “This transaction, with a very well-respected global brand, followed a rigorous selection process. The Asda trustees chose Rothesay Life because, as an annuity specialist, we were able to address the scheme’s complexities and will provide long-term security and market leading customer service for their pensioners.

“We are seeing an increasing number of very large schemes, with strong corporate sponsors, looking to insure pension liabilities. These sponsors want to provide security for their pensioners so they can focus on their core businesses. This trend has seen Rothesay Life write a record level of pension business in 2019. We now provide a safe home in retirement for over 800,000 people and manage £56 billion of assets.”