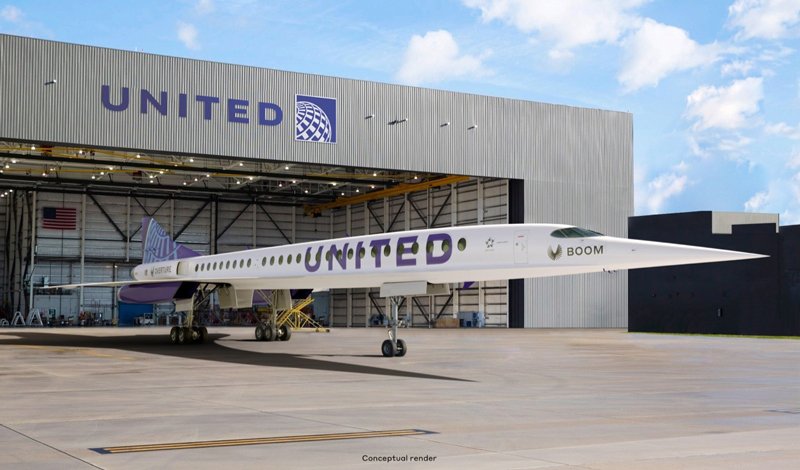 United Airlines’ order for a fleet of supposedly environmentally-friendly new supersonic jets could answer those sceptics who have previously flagged concerns over climate risks of such travel.

The airline announced the deal with Denver-based start-up Boom Supersonic for 15 of its “Overture” jets and an option for 35 more.

The plane hasn’t been built and still requires government approval. United said it will buy the jets once Overture “meets United’s demand safety, operating and sustainability requirements” and that the two companies will work together to meet those requirements.

Overture, which is billed as an environmentally-friendly aircraft running only on up to 100% sustainable aviation fuel, is not expected to be introduced until 2025 and won’t fly until 2026.

United said the Overture jet will be able to fly at speed of Mach 1.7, twice the speed of today’s fasted airliners.  That means it can cut flight times on many routes by nearly half.

The first passengers won’t board until 2029, the companies said.

The use of supposedly more sustainable fuel will be a major factor in answering the concerns over the potential “severe environmental and health impacts” that emerging commercial supersonic aircraft could create by 2035, according to recent research from the International Council on Clean Transportation (ICCT).

A 2,000-strong supersonic fleet would translate to approximately 5,000 flights per day at 160 airports located predominately in Europe, North America, the Middle East, Asia and Oceana, the research said, concluding that: “The impacts, in terms of noise and climate pollution, would likely be severe.”

The researchers said the most heavily impacted regions, including Canada, Germany, Iraq, Ireland, Israel, Romania, Turkey and parts of the United States, could be exposed to between 150 and 200 sonic booms per day, or up to one boom every five minutes over a 16-hour flight day.

However, United Airlines is stressing the sustainable credentials of the proposed new project.

“United continues on its trajectory to build a more innovative, sustainable airline and today’s advancements in technology are making it more viable for that to include supersonic planes,” United CEO Scott Kirby said in a statement.

“Boom’s vision for the future of commercial aviation, combined with the industry’s most robust route network in the world, will give business and leisure travellers access to a stellar flight experience.”

Boom Supersonic founder and CEO Blake Scholl added: “United and Boom share a common purpose — to unite the world safely and sustainably. At speeds twice as fast, United passengers will experience all the advantages of life lived in person, from deeper, more productive business relationships to longer, more relaxing vacations to far-off destinations.”

United said it’s too early to say how much the flights will cost but spokesperson Rachael Rivas said the plane is designed to have operating costs that are 75% lower than the Concorde. The airline is working with Boom far in advance to make sure the Overture is commercially viable.

Concorde currently holds the record for the fastest transatlantic flight by a civilian plane – two hours, 52 minutes and 59 seconds – between New York and London in 1996. But the airliner was retired from service in 2003, with British Airways and Air France blaming a downturn in passenger numbers and rising maintenance costs.

Concorde, operated jointly by British Airways and Air France, was the first supersonic jet to fly commercially. It offered up to 100 passengers first-class service at twice the speed of sound starting in 1976. It could cross the Atlantic in less than four hours, about half what it took other jetliners at the time.

United said it’s too early to say how much the flights will cost but a spokeswoman said the plane is designed to have operating costs that are 75% lower than the Concorde.

The use of supposedly more sustainable fuel will be a major factor in answering the concerns over the potential “severe environmental and health impacts” that emerging commercial supersonic aircraft could create by 2035, according to recent research from the International Council on Clean Transportation (ICCT).