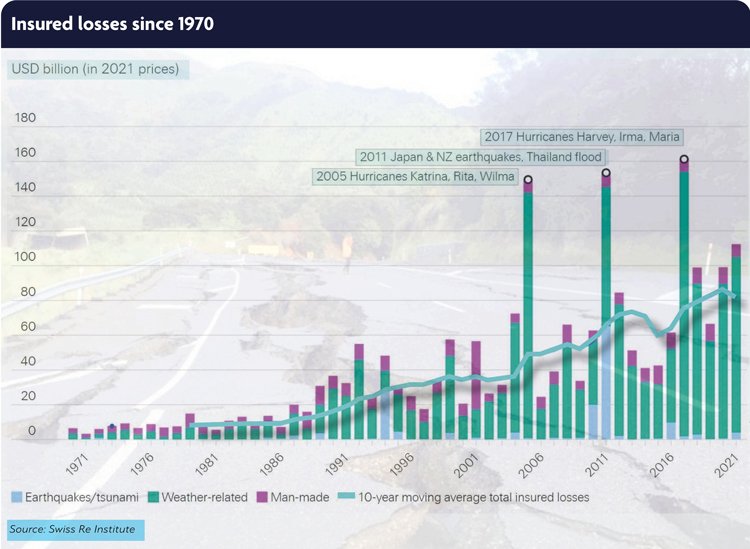 Insured losses from natural catastrophes this year have exceeded the ten year average as Swiss Re warned it is a stark reminder of the threat from climate change, and the rising severity of what have long been deemed secondary perils.

The Swiss Re Institute has issued its preliminary sigma estimates which found extreme weather events in 2021, including a deep winter freeze, floods, severe thunderstorms, heatwaves and a major hurricane, resulted in annual insured losses from natural catastrophes estimated at US$105 billion, the fourth highest since 1970.

While Hurricane Ida was the costliest natural disaster in 2021, winter storm Uri and other secondary peril events caused more than half of total losses as wealth accumulation and climate change effects in disaster-prone areas drive claims. Man-made disasters triggered another $7 billion of insured losses, resulting in estimated global insured losses of $112 billion in 2021.

“In 2021, insured losses from natural disasters again exceeded the previous ten-year average, continuing the trend of an annual 5–6% rise in losses seen in recent decades. It seems to have become the norm that at least one secondary peril event such as a severe flooding, winter storm or wildfire, each year results in losses of more than $10 billion. At the same time, Hurricane Ida is a stark reminder of the threat and loss potential of peak perils. Just one such event hitting densely populated areas can strongly impact the annual losses,” said Martin Bertogg, Head of Cat Perils at Swiss Re.

The two costliest natural disasters of the year were both recorded in the US. Hurricane Ida cost $30 – 32 billion in estimated insured damages, including flooding in New York, and winter storm Uri caused 15 billion in insured losses. Uri brought extreme cold, heavy snowfall and ice accumulation, especially in Texas where the power grid experienced multiple failures on account of freezing conditions. The costliest event in Europe meanwhile was the July flooding in Germany, Belgium and nearby countries, causing up to $13 billion in insured losses, in comparison with economic losses of above $40 billion. This indicates a still very large flood protection gap in Europe. The flooding was the costliest natural disaster for the region since 1970 and also the world’s second highest, after the 2011 Thailand flood.

The two costliest natural disasters of the year were both recorded in the US. Hurricane Ida cost $30 – 32 billion in estimated insured damages, including flooding in New York, and winter storm Uri caused 15 billion in insured losses.