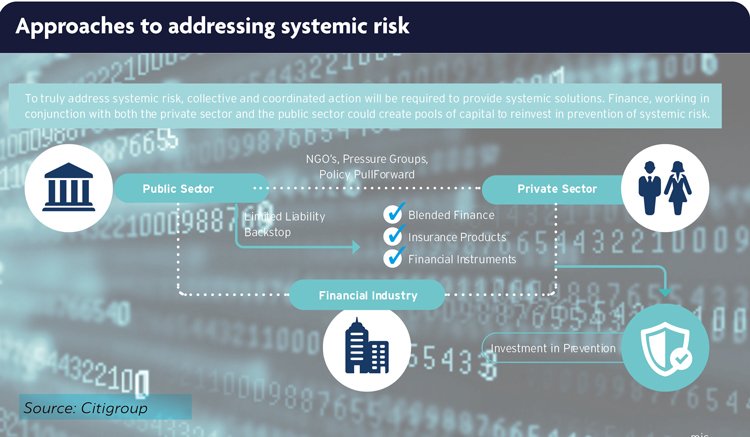 Investment opportunities totalling $3 trillion per year could reduce the probability of huge risks ranging from climate change to pandemics, says a report by Citi Global Perspectives and Solutions in conjunction with the Centre for Risk Studies at Cambridge Judge Business School.

It is often claimed that future crises are unforeseeable, and any efforts to prepare for them will be defeated by ‘black swans’ – events so unimaginable that they can only be apprehended in retrospect.

However, a recent report by Citi Global Perspectives and Solutions in conjunction with the Cambridge Centre for Risk Studies at the Cambridge Judge Business School, University of Cambridge claims that the unexpected nature of catastrophes has less to do with their novelty than the failure of humans and organisations to recall long-past event that may reoccur in the future.

“As a result of a myriad of factors, global risks have changed in their frequency and impact as well as their economic tenacity throughout the 20th century,” the report says. “The average period of time between crises from 1700 to 1900 was 21 years; since 1960, the interval has shrunk to just eight. Similarly, the interval between major natural, technological, and geopolitical catastrophes has also shrunk as the impacts of these risks have evolved a global spread.”

It then outlines the interlinkages between those risks such as how climate change can drive biodiversity loss, impacting food chains and leading to economic crisis. Essentially, this is a structure for institutional memory and planning.

“Many of the prevention and mitigation measures have the ability to drive economic growth, with significant multiplier effects of up to 15 times,” says the report, Systemic Risk: Systemic Solutions for an Increasingly Interconnected World.

“These would be attractive against any economic backdrop, but against the current global economic malaise of secular stagnation and ultra-low returns across all asset classes, it is surely an opportunity we cannot afford to pass up”.

“We can either worry about the future and deal with it when it comes – if indeed we can – or tackle these risks head on, embrace the very feedback loops which make them systemic, save trillions of dollars, and drive economic growth in the process.” Investment opportunities cited to combat such risks include green infrastructure, clean energy, regenerative agriculture, and wildlife disease surveillance.

The report explains that investment opportunities totalling $3 trillion per year could reduce the probability, frequency, and severity of systemic risks ranging from climate change to pandemics that have the potential to create tens of trillions of dollars in liabilities.

The report includes interviews with Dame Inga Beale, former CEO of Lloyd’s of London insurance market, and Mark Carney, UN Special Envoy for Climate Action and Finance and former Governor of the Bank of England. It draws on research by the Centre for Risk Studies at Cambridge Judge including the Cambridge Global Risk Index and the GDP@Risk metric developed at the Centre.

“The world of risk is changing, and the major risks facing sovereigns, supranationals, corporates, and individuals are perhaps greater than ever before, having evolved into so-called ‘systemic risks’ by virtue of the ever-more interconnected nature of our modern world, which while an undoubted force for good, can also create a vicious cycle of magnifying feedback loops,” the report says.

“There is light at the end of tunnel though, and this is provided by the fact the very feedback loops which create systemic risk, can be used as a tool to leverage investment to actually prevent those risks occurring in the first place.

“The opportunity to offset hundreds of trillions of liabilities, for the sake of $3 trillion investment per year – a fraction of the capital available – which could also drive economic growth in a world of ultra-low returns and stalled growth, seems almost too good to be true. We must not let future generations look back and wonder what on earth we were thinking when we decided to take the risk.”

About the Cambridge Centre for Risk Studies

The Centre for Risk Studies is a multidisciplinary centre of excellence for the study of the management of economic and societal risks. The Centre’s focus is in the analysis, assessment, and mitigation of global vulnerabilities for the advancement of political, business and individual decision makers.

Its objectives include the following: 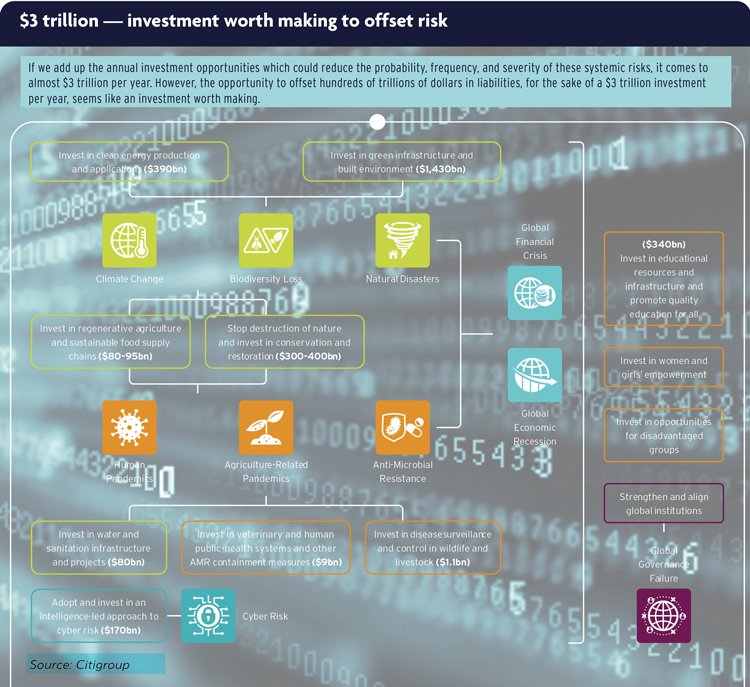 The report explains that investment opportunities totalling $3 trillion per year could reduce the probability, frequency, and severity of systemic risks ranging from climate change to pandemics that have the potential to create tens of trillions of dollars in liabilities.

0
SHARE:
US solar industry should brace itself for wildfire season says GCube