The effects of telematics on the efficiency of risk classification

A recent discussion paper from the Geneva Association examines the role that telematics can play in reducing discrimination.

Proposals for improvements to the auto insurance risk classification system are often evaluated based on their ability to increase the system’s efficiency, which optimally refers to the economic condition in which no one in an insurance risk pool can benefit without someone else in the pool incurring an equal or greater cost. With perfect information in competitive markets, an efficient risk classification system will set the price of insurance equal to the risk-based premium for each policy owner.

Additionally, such pricing aligns the cost of risky behaviour to the driver engaged in such behaviour, thus increasing the likelihood that a driver will consider his expected loss when making decisions about using a vehicle. These decisions include a driver’s choice about whether to drive and how many miles they drive, as well as decisions about how they drive. Considered in this context, the integration of telematics data into insurance risk classification systems holds great promise for increasing the efficiency of auto insurance risk classification systems. Increased efficiency over existing pricing schemes.

As concerns about discrimination in auto insurance pricing have increased, two general types of risk classification systems have emerged: pricing based on traditional risk classification systems, which include age- and gender-based pricing variables, and unisex pricing, which includes limited consideration of age-based pricing and is primarily focused on young drivers.

Telematics-based pricing can improve efficiency in both pricing schemes by providing more granular data on the driver’s exposure to the causes of insured losses.

Including telematics-based insurance data into auto insurance risk classification systems results in improved efficiency compared to traditional auto risk classification systems using age- and gender-based pricing because the traditional systems do not provide comparable incentives for safer driving.64 As demographic variables, both age and gender are static measures of risk that do not change to reflect changes in driving activities that increase or decrease the chance of loss.

For example, because a driver’s age and gender are cemented in place, drivers in a given age/sex pricing category can often engage in driving behaviour that increases the likelihood of suffering an accident—e.g., driving more miles or driving (undetected) above speed limits—without incurring an increase in premiums. On the other hand, pay-how-you-drive programmes set premiums based on pricing variables that are causally related to insured losses, giving drivers greater incentive to drive safely.

Given that age and gender are included as pricing variables in traditional risk classification systems because they are correlated to truer measures of loss exposure that have historically been difficult to measure, their inclusion also results in inaccurate pricing for drivers for whom that correlation does not hold. For example, to the extent that gender is included in risk classification systems as a proxy for mile-age driven, such pricing does not accurately set premiums for drivers whose mileage is far different from the norms of their gender. Thus, drivers who work full-time for ride-sharing firms are charged too little, and the families of 16-year-old male drivers living with their parents who can only occasionally borrow the family car are charged too much. If significant numbers of drivers in their pricing categories exhibit risk profiles that differ greatly from such implied correlations, heterogeneity

The debate about using discriminatory pricing variables in the underwriting of auto insurance remains unresolved, in part because both sides of the issue present valid statistical support for their positions. Many insurers advocate for the continued use of traditional pricing models using age- and gender-based pricing because it provides differentiated risk-based premiums across separate pricing categories, while anti-discrimination policymakers point to the heterogeneity within pricing categories classified by age and gender as a failure to achieve Aristotelean equality.

The commercial viability of telematics-based auto insurance helps resolve this debate, however, by providing increasingly cost-effective pricing data that directly measures the driving behaviour that causes insured losses. As a substitute for age- and gender-based pricing, telematics provides superior risk classification results, thus avoiding mean-based pricing that can cause adverse selection by overcharging lower-risk drivers. Although large insurers have generally been the early entrants into telematics-based pricing to date, reports indicate that smaller insurers are also developing competing products, in part to avoid losing their best, low-risk driving customers due to adverse selection. In this sense, telematics-based auto insurance pricing is a vivid example of how data analytics is reshaping the pricing models used in personal insurance markets.

The author thanks Keith Crocker, two anonymous reviewers, and the participants in the 18th Joint Seminar of the European Association of Law and Economics and The Geneva Association

This is an abridged version of a paper produced by The Geneva Association. The full article can be accessed here. 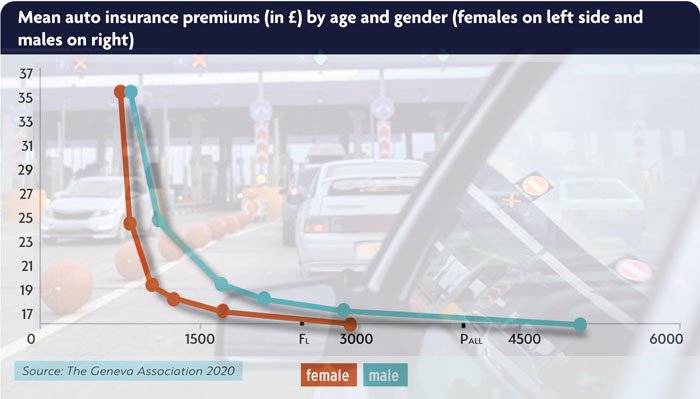 Telematics-based pricing can improve efficiency in both pricing schemes by providing more granular data on the driver’s exposure to the causes of insured losses.