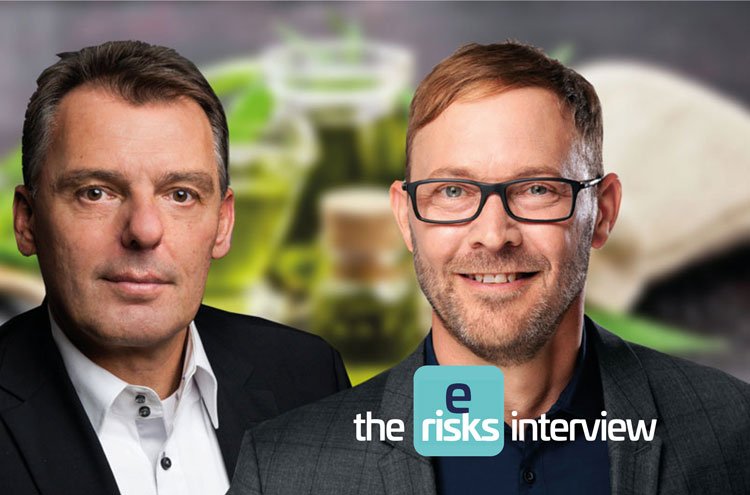 Here the pair talk about the likelihood of cannabis liberalisation in Germany; the impact of recent floods; and what they mean when they talk about the need for a more data-driven approach…

Do you a) think some degree of liberalisation is likely and b) could any such moves represent a significant opportunity for (re)insurers?

RC: I guess there could be some reputational issues if a well-known and well established insurance company were to underwrite the risk. And in the beginning, it might be a niche business.

Besides, I’m not really sure if we are going to see such a liberalisation. Yes, it’s true that there is a lot of pressure from the youth organisations and from some elements of the parties, especially the liberals and the greens, but in Germany we tolerate the use of cannabis. It’s not decriminalised in a legal way but it’s not being prosecuted when you remain for quantities that are obviously for personal use.

I guess that if these coalition talks are successful, we might not see this liberalisation.

RB: I think that Axa stated the obvious, and if you look at the discussions in Baden Baden two years ago, they were already very clear in that respect. The famous 1 in a 100 year events- well, we now have a couple of those within a decade. So, I think the trend is very clear and it obviously has a very strong impact in the market.

Having said that, we have a particular situation in Germany with respect to real estate insurance. Private property insurance is very much in the hands of public insurers – local insurers – who still have almost a 50% market share. So they are very strong in their regions.

Also, another 25% of the market share is with mutuals, who don’t have too much solvency pressure on their balance sheets, so I think the situation is quite stable.

What we will now see, starting with reinsurers, is that premiums will increase. And as costs will increase it will come to the end consumer. There will be growth opportunities, as a lot of people, having seen the events, are considering taking out this cover.

RC: And those who [in the past] needed it most, wouldn’t have gotten it.

RB: We are not surprised by the fact. It’s more that most consumers affected by the floods were surprised that it was not part of the standard buildings insurance.

The market will reconsider this, but the question will be will those who are considering taking on the extra cover want to pay the adequate premium for it, or will be there a trade-off?

RC: Here in Germany we are specialising in heavy and complex liabilities. We manage two run-off books: one in medical malpractice, and one in architects and engineers. With these portfolios we sit on a treasury of legacy data. In the past, data has been used in a descriptive way, for recording and monitoring with a backwards perspective. But we want to make use of it in a predictive way, to be able to factor in how portfolios are going to develop in the future, and to sub-segment elements of the portfolio’s potential for settlements.

RB: It’s a question of how to structure the data you have. We are in an environment where we have extremely long-tail claims, and we have to look backwards over three or four decades. The key is to use our incremental knowledge and know-how to structure the data, to give it the potential to be predictive. It’s not just collecting information, but clustering and making sense of it.

RC: When we talk about data-driven we are not just talking about data. You need to have the people, the skilled experts, who are capable of interpreting the data and able to find patterns.

RC: The good news for us is that there are very few MGAs in Germany! But when we set up Pro in the UK, we very quickly had a lot of demand for incubation of UK MGAs who, because of Brexit, wanted to have a footprint in the EU.