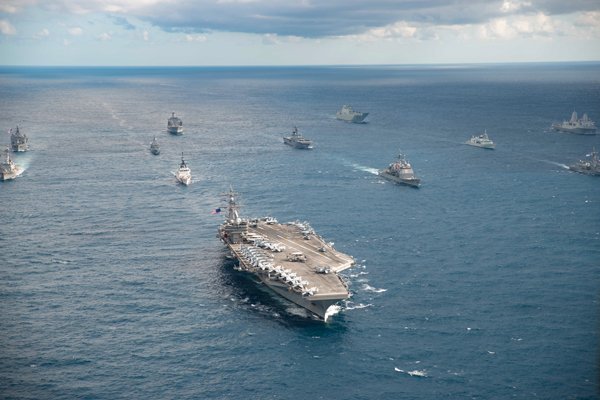 Twitter has seen is fair share of trolls but one tweet this week looks set to have real ramifications for the global maritime sector and its insurers.

“I have instructed the United States Navy to shoot down and destroy any and all Iranian gunboats if they harass our ships at sea.” President Donald Trump took time off leading the US fight against CVOD-19 to issue a new threat to Iran over its actions in the Strait of Hormuz.

The tweet came as tensions have risen in the region as Iranian forces have been accused of harassing US Naval and merchant vessels in the North Arabian Sea.

Iran was not shy in its response to the tweet.

The head of Iran’s Revolutionary Guards, Hossein Salami, said: “I have ordered our naval forces to destroy any American terrorist force in the Persian Gulf that threatens security of Iran’s military or non-military ships.

“Security of the Persian Gulf is part of Iran’s strategic priorities.”

He added: “I am telling the Americans that we are absolutely determined and serious in defending our national security, our water borders, our shipping safety, and our security forces, and we will respond decisively to any sabotage.

“Americans have experienced our power in the past and must learn from it.”

President Trump reaffirmed that the US Navy would not take a step back of threatened.

“We don’t want their gunboats surrounding our boats and traveling around our boats and having a good time,” President Trump said. “We’re not going to stand for it. … They’ll shoot them out of the water.”

The issue is not new but incident numbers have picked up since the start of the year and while a concern President Trump’s tweet has increased tensions with Iran threatening reprisals should any action bet taken.

Analysts believe the tweet and the rhetoric from the President will only inflame the situation and it is likely the summer ahead may well see a similar pattern emerge as Iranian navel forces look to harass international shipping, to if nothing else prove a point that they are bow to be bowed by the US President.

However, it has not gone unnoticed by marine insurers who fear that the situation has the potential to quickly escalate.

While there remains a significant international naval task force in the area to escort vessels through the area it may take only one incident to open merchant vessels to the threat of seizure or attack as was witness in 2019.

One leading underwriter said: “Set against the current oil price crisis this could not have come at a worse time. Whether President Trump is looking to make such statements to seek to impact oil pricing by raising concerns over supply is not clear.

“Owners were worried before, and this has done nothing to lessen their concerns that vessels will be targeted. The area is already identified as increased risk by underwriters so I do not expect to see any rating actions. However, with the shipping sector already suffering from the effects of the pandemic this is not a welcome escalation of a situation that is already a concern.”