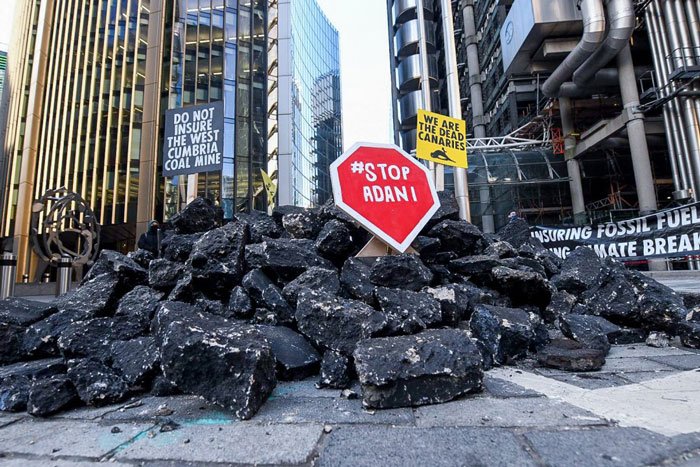 Lloyd’s has once again been thrown into the centre of environmental protests as 12 climate activists from Insurance Rebellion used a tipper truck to dump a large pile of fake coal outside the landmark building.

The two meters cubes of black rubble were used to block the main entrance to the Lloyd’s building as the protestors called on Lloyd’s to cease the underwriting of coal and fossil fuel risks. The market issued a ESG document earlier this year which laid out a timetable for the end to syndicates’ underwriting of coal risks by the end of the decade. However, the protest groups believe that the timetable is too slow and are calling for more immediate action. Police arrested two people dressed as builders for obstruction of the highway.

Harriet, 28, from Insurance Rebellion, said: “Every day Lloyd’s continues to insure fossil fuel projects we move one step closer to climate breakdown. They are complicit in the destruction of our planet, causing millions of people’s homes to be flooded, burnt to the ground in wildfires, and reclaimed by rising sea levels. Fossil fuel companies can’t run without insurance, so let’s stop insuring them.”

The group said the dumped ‘coal’ was designed to highlight Lloyd’s support for the world’s most polluting projects – coal mines, including the highly controversial Adani Carmichael coal mega-mine in Australia. Protesters placed a #Stop Adani sign next to the coal. The controversial Carmichael mine would put in place the infrastructure needed to unlock the Galilee Basin, one of the largest untapped coal reserves on Earth, paving the way for at least eight more coal mines.

The top 10 largest Lloyd’s of London insurers have ruled out underwriting the controversial Adani Carmichael coal mine, with Tokio Marine Kiln (TMK) the latest insurer to announce it would drop “any future underwriting” of the project. However, Lloyd’s has resisted putting in policy that would exclude other insurers in its marketplace insuring the mine.

Insurance Rebellion has issued a list of demand stop the market. They have urged Lloyd’s immediately and forever:

> Tell the truth about who you insure and the impact of insuring and/or reinsuring fossil fuels and biomass, which enables climate destruction, puts profit over people, and puts everything we love at risk.

> Stop insuring and/or reinsuring any and all fossil fuel and biomass companies and projects, including those that already exist, are expanding, are new, or are planned.

> Exclude all fossil fuel and biomass companies from syndicate level assets, Members’ Funds, and the Central Fund of Lloyd’s.