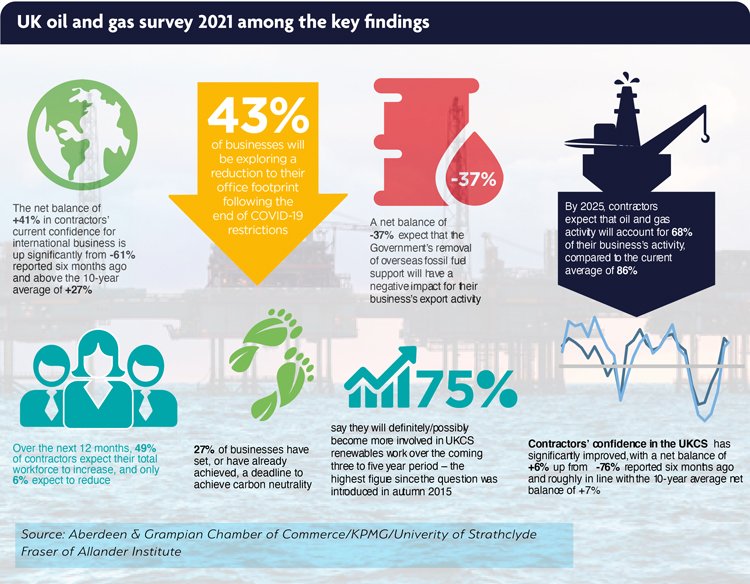 UK oil and gas sector on cusp of renewables transformation

The latest data on the UK oil and gas industry shows the sector is “on the cusp of dramatic transformation” into renewables as it recovers from the impact of the coronavirus and positions itself for a low carbon future.

The findings are contained in the 33rd Oil and Gas survey, conducted by Aberdeen & Grampian Chamber of Commerce’s Research Chamber in partnership with the Fraser of Allander Institute and KPMG UK.

Significantly, 75% of contractors surveyed anticipate moving into renewables work over the coming three to five-year period, the highest level recorded since the question was first asked in 2015.

On average, they believe oil and gas will account for less than three quarters of their business activity by 2025 – down from the current average of 86%.

The findings also reveal that over the past 12 months optimism in the international oil and gas sector has increased for more than half of contractors surveyed (54%) with just 13% reporting a decline.

When asked about plans to reach net zero, around a quarter of firms (27%) have set their own carbon neutral target with 3% already having achieved it and almost two-fifths (38%) indicating that while they are committed to being carbon neutral they have not set a deadline for achieving it. For those that have, ambitions range from 2030 to 2050 in terms of completion.

The report also indicated this type of target is becoming part of procurement processes, with 37% of firms expecting to evaluate their suppliers’ carbon footprints when awarding or renewing contracts.

Firms cited a range of reasons for committing to reduce their emissions, with 56% citing environmental concerns, 51% seeking to increase their sustainability or longevity as a company; and 50% driven to improve perceptions of their own business.

Following the end of CV19 pandemic and removal of lockdown restrictions, 83% of firms say they will be considering a more flexible working policy with 80% considering replacing some face-to-face activity with virtual equivalents. More than two-fifths (44%) said they will be accelerating their diversification away from oil and gas and 43% will be exploring a reduction to their office footprint.

Martin Findlay, senior partner at KPMG in Aberdeen, said: “As we emerge from the pandemic, we’re facing a new set of climate-related challenges, driven by policy makers and an increasingly impatient public. With that in mind, it’s incredibly reassuring that our survey found contractor confidence in the UKCS has significantly improved.”

“The common misconception is that oil and gas is the cause of much of the climate crisis we face, when it’s actually often the driving force behind a potential renewables revolution,” he added.

He added: “75% of contractors interviewed for the survey told us they’re likely to become more involved in UKCS renewables work over the coming three to five-year period. That’s the highest level recorded since the question was introduced in 2015. Contractors also told us oil and gas activity would account for less than three quarters of their business activity by 2025 – down from the current average of 86%.”

“The industry is on the cusp of transformation and much of our findings reflect the collective sense of anticipation. It certainly feels that in Aberdeen we are heading towards the ‘new normal’ after a long period of reliance on carbon-based energy sources.”

Following the end of CV19 pandemic and removal of lockdown restrictions, 83% of firms say they will be considering a more flexible working policy with 80% considering replacing some face-to-face activity with virtual equivalents. More than two-fifths (44%) said they will be accelerating their diversification away from oil and gas and 43% will be exploring a reduction to their office footprint.