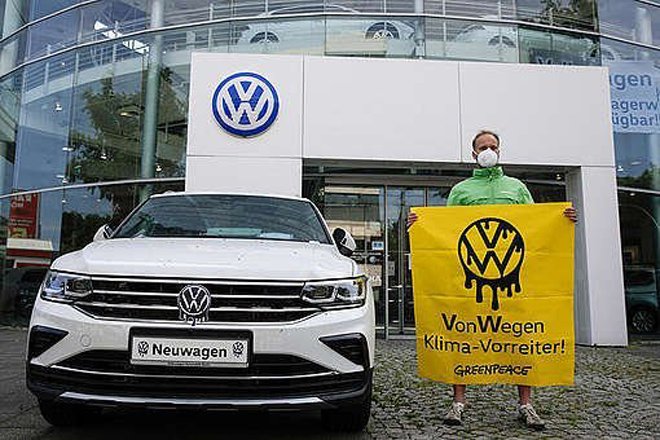 Volkswagen to be sued for “climate” inaction

Greenpeace Germany announced it is suing the world’s second largest car manufacturer, for failing to decarbonise the company in line with the 1.5°C goal agreed in Paris.

Based on the most recent reports by the Intergovernmental Panel on Climate Change (IPCC) and the International Energy Agency (IEA), the environmental organisation demanded the company end the production of climate-damaging internal combustion vehicles and reduce its carbon footprint by 65% by 2030 at the latest.

“By holding Volkswagen accountable for the consequences of its climate-damaging business model, Greenpeace Germany is enforcing the landmark Karlsruhe constitutional court ruling of April 2021, when the judges ruled that future generations have a fundamental right to climate protection,” the organisation said in a statement. “Large companies are equally bound by this requirement.”

Martin Kaiser, Executive Director of Greenpeace Germany, said: “While people suffer from floods and droughts triggered by the climate crisis, the car industry, despite its enormous contribution to global warming, seems unaffected. The ruling of the Constitutional Court represents a mandate to quickly and effectively enforce the legal protection of our common livelihoods. We need all hands on deck to protect our common future.”

In its letter to Volkswagen preceding the filing with the court, Greenpeace Germany claimed that the company’s current and planned measures contravene the Paris climate goals, fuel the climate crisis and thus violate applicable law.

It added disregarding the need to rapidly phase out the internal combustion engine to be able to stay below 1.5°C, Volkswagen continues to sell millions of climate-damaging diesel and petrol cars, causing a carbon footprint almost equivalent to Australia’s total annual emissions, contributing to increase extreme weather events, according to research by Greenpeace Germany.

The plaintiffs, including Fridays for Future activist Clara Mayer, are asserting civil liability claims for the protection of their personal liberties, health and property rights, based on the May 2021 Dutch Court case against Shell,  which ruled that large corporations have their own climate responsibility and ordered Shell and all its subsidiaries to do more to protect the climate.

Roda Verheyen, counsel for the plaintiffs explained: “Whoever delays climate protection harms others and thus behaves unlawfully. This is clear on the basis of the constitutional court decision, and this also and especially applies to the German car industry with its gigantic global CO2 footprint. Clearly, this is not a game. Civil law can and must help us to prevent the worst effects of climate change by ordering corporations to stop emitting – otherwise they endanger our lives and deprive our children and grandchildren of the right to a safe future.”

Mayer added: “Climate protection is a constitutional right. It is not acceptable that a company should so significantly prevent us from reaching our climate targets. At the moment, Volkswagen is making huge profits by producing climate-damaging cars, which we will have to pay dearly for in the form of climate consequences. The basic rights of future generations are in danger, as we are already seeing the effects of the climate crisis. The begging and pleading has come to an end, it is time to hold Volkswagen legally responsible.”

In its letter to Volkswagen preceding the filing with the court, Greenpeace Germany claimed that the company’s current and planned measures contravene the Paris climate goals, fuel the climate crisis and thus violate applicable law.