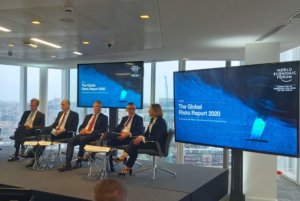 The world faces a geopolitical and environmental disaster in the coming decade unless global leaders unite to tackle the threats facing the planet.

In a hard-hitting launch to the World Economic Forum’s Global Risk Report 2020 published today WEF President Borge Brende warned action had to be taken sooner rather than later.

“The political landscape is polarised, sea levels are rising and climate fires are burning,” he said. “This is the year when world leaders must work with all sectors of society to repair and reinvigorate our systems of cooperation, not just for short term benefits but for tackling deep rooted risks.”

For the first time since the report was first published a decade ago environmental risks occupy the top five concerns for global business leaders. There are also significant fears over political instability and the potential for the disintegration of globalisation and with it an economic slowdown.

It added: “Unless stakeholders adapt to today’s epochal power shift and geopolitical turbulence, while still preparing for the future, time will run out to address some of the most pressing economic, environmental and technological challenges. This signals where action by business and policy-makers is most needed.”

In the face research that shows human activity has resulted in the loss of 83% of all wild mammals and half of plants, Peter Giger, Group Chief Risk Officer at Zurich Insurance Group issued a rallying call for action to reverse the impacts of climate change and the impact on biodiversity before they become irreversible.

“Biologically diverse ecosystems capture vast amounts of carbon and provide massive economic benefits that are estimated at $33 trillion per year, the equivalent to the GDP of the US and China combined. It’s critical that companies and policymakers move faster to transition to a low carbon economy and more sustainable business models.

“We are already seeing companies destroyed by failing to align their strategies to shifts in policy and customer preferences. Transitory risks are real, and everyone must play their part to mitigate them. It is not just an economic imperative; it is the right thing to do.”