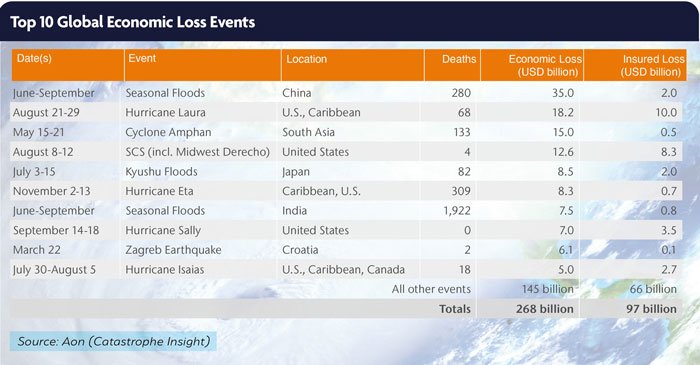 Secondary perils have become an increasingly important topic for various sectors ranging from the insurance industry to local governments to investment strategists. Such perils, which often generate small to medium-sized financial damage costs, include severe convective storms, floods, wildfires, winter weather, etc. Primary perils, those thought to be best understood to have the highest cost potential, include tropical cyclones and earthquakes.

Severe Convective Storm typically generates most interest with secondary perils given a higher frequency of occurrence, but wildfire has become an increasingly important point of focus. 2020 marked the third time in the last four years where global insured losses from wildfires exceeded $10 billion. This is a threshold that the peril had never crossed prior to 2017 .

The United States has often been the primary driver of major wildfire impact to residential and commercial property in recent years given prolific events in California, but Australia and Canada have also recorded billion-dollar industry event pay-outs in the past decade. More questions are being asked as to why these fire losses are becoming more frequent and expensive. The answer, unfortunately, is a complex one that scientists and communities are trying to collectively solve.

There is increasing evidence that the environment for wildfires has become more conducive for conflagration. Numerous studies have shown that in the United States, South America, and elsewhere around the world that land temperatures continue to rise, drought conditions are more intense, and fire seasons are becoming longer.

In fact, 2020 was the warmest May through November stretch on record and set the stage for a modern state record for most acres burned in a season dating to the early 1980s. This also included five of the six largest fires in California since 1932. Ancillary factors like reduced fire suppression or beetle infestation has left much more available fuel to burn as dead trees or brush lay scattered in forested areas that have a history of fire activity.

While climate change is not the primary cause of increased fire risk, it has absolutely proven to be an important influencing factor on the basic hazard itself. Attribution studies, which attempt to link climate change to individual events, are becoming more common. Early results are generally inconclusive in being able to accurately quantify the hazard impact and then define that attributed economic cost.

While the environmental conditions are a critical and highly concerning component to fire behaviour and spread, the fact remains that the ignition, fire location, and the vulnerability of the community remain most integral regarding risk to life and property. The human component grows more important by the day. From an ignition standpoint, a non-negligible percentage of fires are ignited by either intentional or unintentional human behaviour. The other factor is where humans live and how we continue to build. If migration patterns into known fire locations grow, and not enough fire suppression is done to minimize ground level spread, this is a very difficult trend. Population totals in the Wildland Urban Interface (the divide between urban and forested areas) or the Intermix (directly inside a forested area) continue to increase on an annual basis in California.

The other issue is a need for better and smarter construction and maintenance practices. Taking simple actions, such as installing fire resistant roofing or clearing potentially combustible materials away from a property, can immediately lower risk. The need for community “buy-in” is key, as even one vulnerable building that catches fire can quickly ignite an entire neighbourhood. Organisations such as the Insurance Institute for Business and Home Safety (IBHS) in the United States and the Institute for Catastrophic Loss Reduction (ICLR) in Canada are examples of important collaborative efforts between the public and private sectors to mitigate risk from various natural perils. Wildfire risk will only grow with time. Awareness of this risk is an important first step. Enacting smart mitigation strategies is what is needed next.

Wildfires have always been a complex challenge in South America. Most fires are a direct result of human behaviour via deforestation, logging, mining, and other types of land clearing practices. These fires are typically conducted intentionally and illegally as local farmers, cattle ranchers or other industries seek to open up lands for fiscal opportunity. Back-to-back years in 2019 and 2020 have resulted in substantial burning in some of the most vital aspects of the Amazon Rainforest. The Amazon is a critical component in mitigating global warming by being the world’s largest terrestrial “carbon sink” which helps absorb carbon for an indefinite period of time and can reduce harmful carbon dioxide concentration in the atmosphere.

The fires of 2020 were particularly significant given the substantive spatial area burned. The combination of intentional burning while parts of Brazil, Bolivia, Paraguay, and Argentina coped with La Niña-influenced severe drought conditions prompted rapid wildfire spread. The main areas affected included the Brazilian and Bolivian Amazon, Argentina’s Parana Delta wetlands, the Gran Chaco forest, and the Pantanal wetlands. In the Brazilian Amazon alone, more than 2 .7 million acres (1 .1 million hectares) of land was lost from August 2019 to July 2020; a 9 .5 % increase from the previous period and the highest level in more than a decade. The Pantanal wetland region burned even more area: 11 .1 million acres (4 .5 million hectares) . This was an 84 %year-over-year increase, per the Laboratory for Environmental Satellite Applications (LASA).

The United States has often been the primary driver of major wildfire impact to residential and commercial property in recent years given prolific events in California, but Australia and Canada have also recorded billion-dollar industry event pay-outs in the past decade. 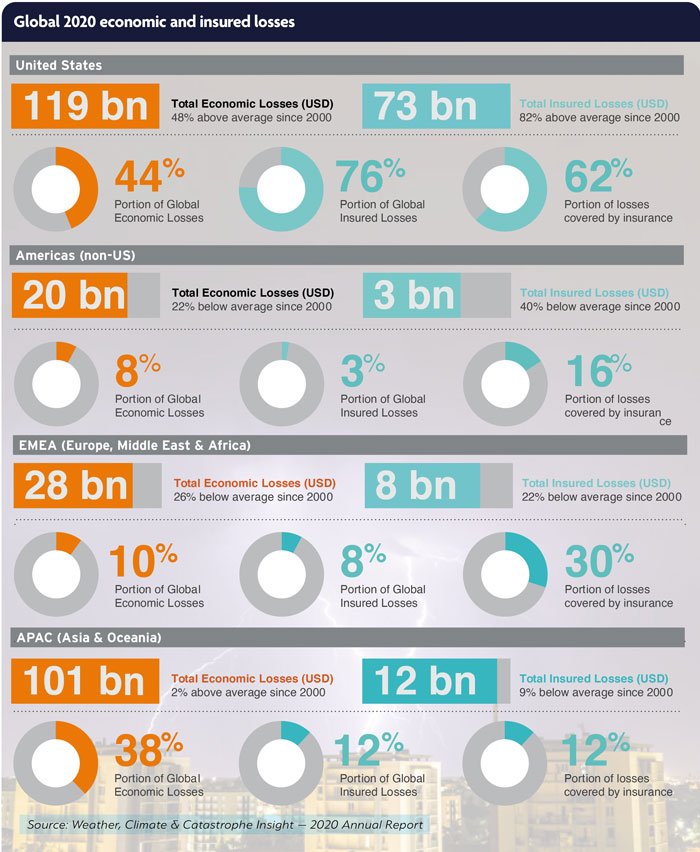 0
SHARE:
Daria anniversary a wake-up call to be prepared