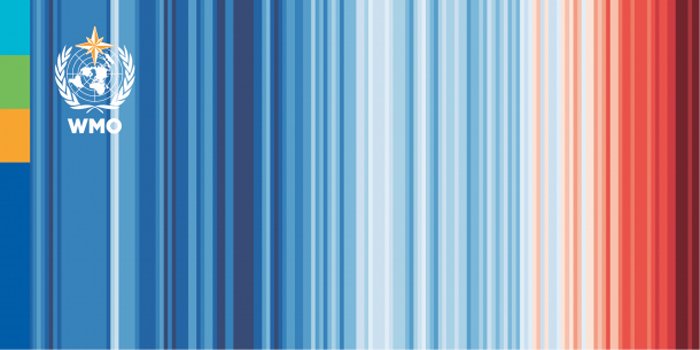 World told to show its stripes in climate fight

Climate experts have marked the world’s June Summer/Winter solstice with the launch of a new campaign which aims to enhance the pace of the fight against climate change.

The 21 June has been designated Show Your Stripes Day with UN Climate Change, the World Meteorological Organization and the Intergovernmental Panel on Climate Change all backing the campaign, which is also designed to build momentum for a strong outcome of the UN Climate Change Conference COP26 in Glasgow in November.

The campaign has been inspired by data visualisations from Prof. Ed Hawkins, a climate scientist at the University of Reading in the United Kingdom and a lead author of the Intergovernmental Panel on Climate Change’s Sixth Assessment Report. He has spearheaded the creation of “warming stripes” graphics, which are visual representations of the change in temperature as measured in each country over at least the past 100 years. Each stripe represents the temperature in that country averaged over a year and is based on internationally recognised datasets.

“The Warming Stripes are a simple and compelling way to visualise that the world is warming and that every country is warming. The graphics can help start local conversations about the increasing risks from climate change wherever you live, and the necessary actions to avoid the worst consequences,” he said.

“For virtually every country or region, the stripes turn from mainly blue to mainly red in more recent years, illustrating the rise in average temperatures in that country,” said the campaign.” The most dramatic change is in the Arctic, which is warming more than twice as fast as the global average.

“2021 is a make-or-break year for climate action, with the window to prevent the worst impacts of climate change – which include ever more frequent more intense droughts, floods and storms – closing rapidly.”

The campaign is run in conjunction with Climate Central, an independent organisation of leading scientists and journalists researching and reporting the facts about our changing climate and its impact on the public. It is supported by TV weather presenters and meteorologists who will be displaying the warming stripes on their broadcasts and social media posts.

“Weather presenters make excellent climate communicators. You play a major role in educating the public about the risks of climate change and extreme weather,” WMO Secretary-General Prof. Petteri Taalas told a workshop of weather presenters organised by the International Weather and Climate Forum.

“The WMO State of the Climate report showed that 2020 was one of the three warmest years on record. It capped the warmest decade on record.  The average global temperature was 1.2°C above the pre-industrial levels and glaciers continued to retreat, with long-term impacts on sea level rise and water security,” added Prof. Taalas.